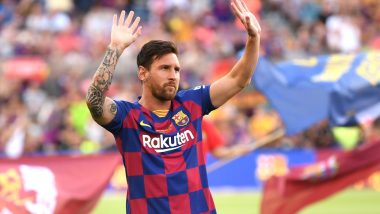 Lionel Messi’s reported refusal to sign a new deal with Barcelona has taken the footballing world by storm. The Argentine is considering his future with the Spanish side, with whom he has been since 2001, and has been linked with a move away after being frustrated on how the is being run in recent years. With the 33-year-old’s future in doubt, former Barcelona great Rivaldo believes that Messi could be tempted to join Pep Guardiola at Manchester City. Lionel Messi Withdraws Contract Renewal Negotiation Talks With Barcelona, Likely to Leave the Club.

Recently, Spanish news outlet Cadena Ser reported that Lionel Messi has halted contract renewal talks with Barcelona as the Argentine is looking at other options before committing his future to the Catalan side. The 33-year-old’s contract expires next summer and Brazil legend Rivaldo thinks that he could be drawn towards England to reunite with former manager Pep Guardiola. Lionel Messi Transfer Rumours: Cristiano Ronaldo’s Juventus Second Favourite to Sign the Argentine.

Pep Guardiola and Lionel Messi formed a staggering manager-player partnership, winning 14 trophies in the four years where the current City boss was in charge of the Catalan side. The duo lifted three La Liga crowns and two Champions League titles among many other’s during their time together in Spain.

Speaking to Betfair, Rivaldo said ‘If he is considering leaving the club, then something mustn't be good in the Barcelona dressing room and perhaps he is tired with all the constant problems that have surrounded the club in the last few months. When Messi's contract ends, he will be 34, but with his class, I think he could still easily play in Premier League’

‘It will be sad to see him leaving Barcelona once his contract ends eventually, but I still hope that he can stay for now. Despite his connection to the club, he has the right to move if he wants and reuniting with Pep Guardiola at City will be tempting for him, as the two of them formed a great coach and player partnership at Barca.’ He added.

Juventus are also one of the club tipped to sign Lionel Messi if he is to leave Barcelona once his contract runs out at the end of next season. Doubts about the Argentine’s future have been raised on several occasions in the past but every time he has chosen to stay in Spain and every Barcelona fans will be hoping he does the same this time as well.

(The above story first appeared on LatestLY on Jul 05, 2020 07:35 PM IST. For more news and updates on politics, world, sports, entertainment and lifestyle, log on to our website latestly.com).