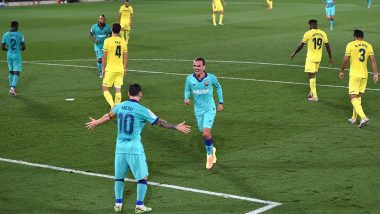 Barcelona ended their two-game winless run and kept their title hopes alive as they defeated Villarreal 4-1 at the La Ceramica stadium on Sunday. This was the Catalans' best performance under new manager Quique Setien and one which will give Antoine Griezmann loads of confidence as he ended his goal drought with a sumptuous goal. The Frenchman has been left out of the line-up in recent weeks but responded when called upon. Lionel Messi Transfer Not Happening? Argentine Wants to End Football Career in Barcelona, Claims Josep Maria Bartomeu.

Barcelona needed to win the game in order to be in touching distance of Real Madrid, who earlier in the day, went seven points clear at the top after their win over Athletic Bilbao and the defending La Liga champions responded with a solid performance. Luis Suarez, Antoine Griezmann and Ansu Fati were on target as Quique Setien’s men put on a clinical display. Not Going to Speculate on Lionel Messi's Future, Says Barcelona Coach Quique Setien.

Griezmann, who had gone for eight matches without a goal, ended his drought with a moment of class as the Frenchman finished off a brilliant attacking move. The 29-year-old latched on to his captain’s pass and chipped Sergio Asenjo in Villarreal goal from the edge of the 18-yeard-box, a strike which resembled Messi’s finish against Betis last year.

This goal put the Catalan’s 3-1 up in the game after Luis Suarez had given them the lead following Gerard Moreno’s equaliser. The defending champions dominated the game in the second period as well and the result was secured once Ansu Fati netted in the dying minutes.

This result sees the Blaugrana’s keep pace with Real Madrid at the top of the table but are still four points behind them. With four games left in the season, Barcelona need Zidane’s team to drop points if they are to retain their league title.

(The above story first appeared on LatestLY on Jul 06, 2020 12:47 PM IST. For more news and updates on politics, world, sports, entertainment and lifestyle, log on to our website latestly.com).