But strangely, while the players and entire support staff celebrated the win over Getafe, club captain and talismanic striker Lionel Messi kept himself out of the celebrations. The 34-year-old has been reportedly ruled out of a couple of more matches following the knock against Villarreal, in which he was withdrawn at half-time. 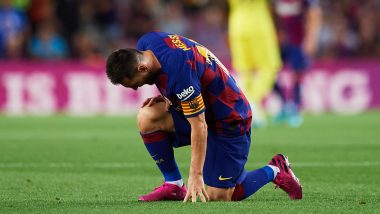 Barcelona for the first time this season registered a victory away from home when they beat Getafe 2-0 in the 2019/20 La Liga on Saturday. The celebrations that ensued following the final whistle jut showed how important the victory was for the club. But strangely, while the players and entire support staff celebrated the win over Getafe, club captain and talismanic striker Lionel Messi kept himself out of the celebrations. The 34-year-old, who has only made one start for the club this season, has been reportedly ruled out of a couple of more matches following the knock against Villarreal, in which he was withdrawn at half-time. Best FIFA Football Awards 2019 Courts Controversy after Lionel Messi Wins Men’s Player of the Year Trophy: All You Need to Know about the Voting Row.

According to a report from Don Balon, Messi is anxious about the extent of his recovery from the abductor problem he faced against Villarreal. Manager Ernesto Valverde had earlier informed that the Argentine will undergo tests at the club’s training ground following the injury last week. And now reports claim that Messi has very little chances of participating in the Blaugrana club’s next few games. The disappointed forward, therefore, kept to himself at Getafe and chose not to participate in the victory celebrations. Barcelona hosts Inter Milan in the Champions League and also play Sevilla in the league before the two-week international break.

Messi has already missed the initial part of the 2019/20 season with an ankle injury before making his first appearance against Borussia Dortmund in the Champions League when the club season resumed at the end of the first international break. He came off the bench in successive games against Dortmund and in the 0-2 defeat to Granada before making his first start against Villarreal. But has now been ruled out with another injury – for the second time in two months – leaving the club in splits as both the domestic and league season enters its crucial stages.

A Messi-less Barcelona, however, triumphed against Getafe registering their first win away from home across all competitions. But despite the victory, manager Valverde is worried about missing his captain for the crunch of the season. The Barca boss was nervous when asked on the injury update of Lionel Messi. "I don't know how long he will be out for, we hope he can return to the team soon,” Valverde has said at the pre-match conference before Saturday’s win before reassuring “It's not serious, it's a small strain.”

It was already reported earlier that the Argentine skipper took longer than expected to completely recover from the earlier injury and if things go the same with the abductor problem, Barcelona might have to face the season without their captain. The Catalan club were placed seventh in the 2019/20 La Liga team standings before the victory against Getafe. Barcelona also, for the first team this season, entered the top four and are behind leaders Real Madrid, Granada and Atletico. Barcelona have 13 points from 7 games with only 4 victories.

(The above story first appeared on LatestLY on Sep 29, 2019 09:10 PM IST. For more news and updates on politics, world, sports, entertainment and lifestyle, log on to our website latestly.com).