The Argentine star has reportedly agreed to a contract extension, which could be announced on his 34th birthday, this week. 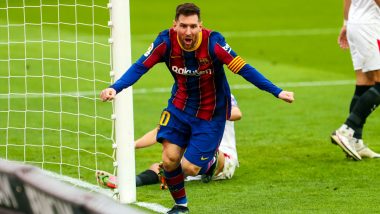 All the uncertainty around Lionel Messi's new contract is set to be cleared this week, with reports in Spain suggesting that the star forward's contract extension is set to be announced this week on his 34th birthday, on Thursday, June 24. Messi's future at Barcelona was highly uncertain after he had decided to leave Camp Nou last summer. Since then, there has been also been a lot of speculations regarding his next potential destination, being that of either Pep Guardiola's Manchester City in the Premier League or a reunion with Neymar at Paris Saint-Germain. But all of those talks and rumours seemed to have faded when Barcelona appointed Joan Laporta as the new club president in March. Lionel Messi Reacts After Equalling Record Of Most Appearances For Argentina During Copa America 2021 Clash Against Paraguay

Following Laporta's return to the Barcelona hierarchy, it was reported that Messi might rethink his stance of leaving Barcelona and instead commit his future to the Catalan giants. "Leo Messi's boots will continue on the Camp Nou pitch. He wants to stay. I do not contemplate a no. But it isn't easy. We'll do what we can. There is no need to seduce him, he is determined if there are a series of circumstances to stay," Laporta was quoted as saying by Barcelona's official website.

Barcelona signing Sergio Aguero also has boosted chances of Messi's stay at the Camp Nou, since the two Argentine stars are great friends. If reports are to be believed, Messi, whose contract at Barcelona runs out on June 30, would put pen to paper on a new deal for two more years. There would also be an option to increase his Barcelona stay by one more year in his new contract. Messi also has reportedly agreed to take a pay cut since Barcelona currently are in a lot of debt.

Messi currently is playing in the Copa America where he has helped Argentina to two wins in three matches so far. His performance has been very instrumental for Argentina, the highlight of which was a sensational free kick in their first match against Chile.

(The above story first appeared on LatestLY on Jun 23, 2021 05:42 PM IST. For more news and updates on politics, world, sports, entertainment and lifestyle, log on to our website latestly.com).