Love Is in the Air! Lionel Messi's Wife Antonella Roccuzzo Kisses Him Sweetly on Cheek In Cute PDA Pics 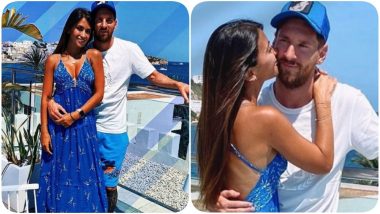 Lionel Messi is currently holidaying in Ibiza with his family. The six-time Ballon d’Or winner is seen letting his hair down. Messi was seen flaunting PDA  with his beautiful wife Antonella Roccuzzo on the yacht in Spain. The 33-year old showed off his well-chiselled abs as he was holidaying in Spain.  Luis Suarez and his family are also a part of the holiday. Severa pictures of Messi's PDA have gone viral on social media. Needless to say that the chemistry between the two is sizzling and they are surely soaring the temperatures. Lionel Messi Transfer News Update: Argentine’s Father Sparks Inter Milan Rumours.

Talking about Lionel Messi's professional life, the Argentine has had quite a difficult time with his team Barcelona. On more than a couple of occasions, did the Barca captain lashed out at the management of the Catalan Giants for the way they functioned. To top it all, they even lost La Liga 2019-20 to Real Madrid. An ideal holiday is something that Messi needed the most. Check out the romantic pictures of his holiday.

Several reports claim that Messi is planning to quit Barcelona after being fed up of the top management. Only time will reveal the truth. But for now, we are surely going gaga over these snaps!

(The above story first appeared on LatestLY on Jul 25, 2020 11:21 AM IST. For more news and updates on politics, world, sports, entertainment and lifestyle, log on to our website latestly.com).