Premier League winner Manchester City will play Spanish giants Real Madrid in the Champions League semi-finals after a 0-0 draw with Atletico Madrid in the Wanda Metropolitano Stadium made good of the 1-0 home win from their quarter-final first leg. 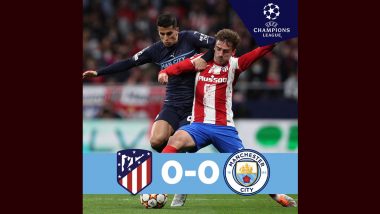 Madrid, April 14: Premier League winner Manchester City will play Spanish giants Real Madrid in the Champions League semi-finals after a 0-0 draw with Atletico Madrid in the Wanda Metropolitano Stadium made good of the 1-0 home win from their quarter-final first leg. Pep Guardiola's side showed in the closing minutes that it is just as adept at the 'darker arts' of the game as Diego Simeone's side had shown in the first leg and were able to close the game down in the closing minutes. Atletico Madrid 0-0 Manchester City, UCL 2021-22: After Goalless Draw City Sets up Semis Clash With Real Madrid.

Anyone expecting Atletico to change their usual defensive tactics to get back into the tie in the first half was in for a disappointment as Diego Simeone's side remained content to sit deep despite their 1-0 defeat from the first leg. With City content to control the ball, very little happened before the break, with Atletico managing one shot, while the visitors were unlucky not to double their advantage after Ilkay Gundogan thumped the ball against the post after a scramble.

Things changed after the break as Atletico finally began to look for the goal they needed to get back into the tie. Firstly, Koke set Antoine Griezmann free down the right-hand channel, only for Aymeric Laporte to block his effort, before Griezmann then set up Joao Felix, who shot just wide, reports Xinhua. All of a sudden, it was all Atletico as Joao Felix and Angel Correa combined for Rodrigo de Paul to fire wide with 20 minutes to go. UCL 2021-22: Who Plays Whom in Semifinals? Full Fixtures, Schedule With Match Timings in IST.

Correa went down in the City penalty area and looked to have a good case for a penalty as Rodri pulled at his shirt, but the referee waved play-on and the game got bad-tempered as Felipe was sent off for a foul on Phil Foden. Correa drew a good save from Ederson in the 98th minute and City were able to see out the remaining moments of an increasingly bad-tempered injury time.

(The above story first appeared on LatestLY on Apr 14, 2022 10:30 AM IST. For more news and updates on politics, world, sports, entertainment and lifestyle, log on to our website latestly.com).