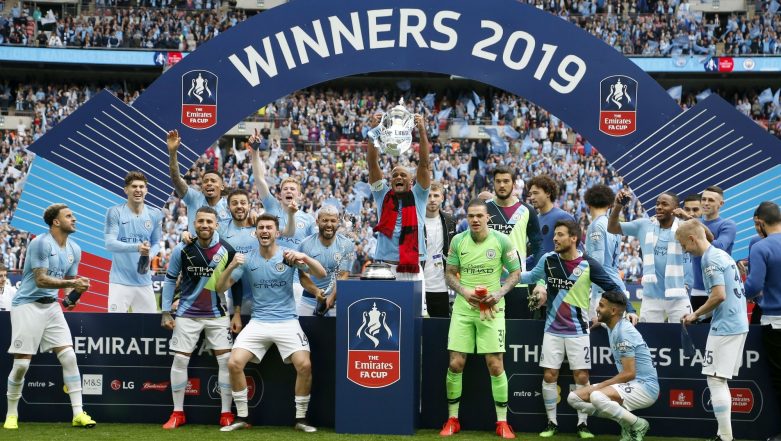 London, May 19: Manchester City handed Watford a 6-0 hiding in the FA Cup final to complete an unprecedented domestic treble. David Silva, Gabriel Jesus, Kevin De Bruyne and Raheem Sterling all found the target on Saturday to help City to their third domestic tile of the season after winning the EFL Cup and the Premier League.

Watford nearly opened the scoring with an early chance coming Roberto Pereyra's way. The Argentine found himself one on one with City keeper Ederson but the latter managed to make the save. After that, it was all one way traffic as City asserted themselves on the game.

The 33-year-old midfielder, David Silva, started the scoring in the 26th minute and 12 minutes later, Gabriel Jesus doubled City's lead. The score remained 2-0 in their favour at half time. At the 60-minute mark, Kevin De Bruyne scored at the end of a counter attack to make it 3-0 and eight minutes later, he set up Gabriel Jesus for the fourth. Pep Guardiola Wants Leroy Sane to Stay in Manchester City.

Sterling then scored two more to take City's tally for the night to six. This is City's sixth FA Cup title win, which is seven short of Arsenal's record 13 wins. In February 2019, City beat Chelsea on penalties in the EFL Cup final. Then, the Pep Guardiola-led side outlasted Liverpool in a the Premier League to win the title a second consecutive time.

Had Watford won the competition, they would have qualified for the Europa League. Their defeat means that Wolverhampton Wanderers, who finished seventh in the Premier League, will play European football for the first time since 1980.