Cristiano Ronaldo Records: Milestones and Feats Accomplished by the Juventus Star After His Brace Against Lazio in Serie A 2019–20

Ronaldo reached 30 league goals in Serie A this season with his twin strike against Lazio making it for the time first time in three seasons that he has breached 30-goal mark in a league. It was also the first time, in two seasons in Italy, that the Portuguese has netted 30 goals in the Serie A after scoring only 21 times in his debut season. 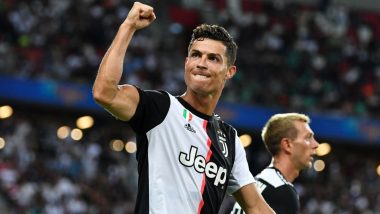 Cristiano Ronaldo added another fresh feather to his illustrious hat with a brace in Juventus’ 2-1 win over Lazio in Serie A 2019-20 on Monday. Ronaldo scored both of Juventus’ goals helping his side record their first league win in four games. His double dropped Lazio, who were only a point behind Juventus when the Serie A resumed, to fourth and took Juventus eight points clear on top of the points standings. Ronaldo also returned into scoring ways after failing to find the net in the 3-3 draw against Sassuolo. The Portuguese star with his goals broke several records. Maurizio Sarri Hails Cristiano Ronaldo For His Brace During Juventus vs Lazio, Says ‘When Ronaldo Smells Blood, He’s Extraordinary’.

Ronaldo reached 30 league goals in Serie A this season with his twin strike against Lazio making it for the time first time in three seasons that he had breached the 30-goal mark in a league. It was also the first time, in his two seasons in Italy, that the Portuguese has netted 30 goals in the Serie A after scoring only 21 times in his debut campaign. As Ronaldo continues breaking records, take a look at some records he created against Lazio. Lionel Messi Records: A Look at All Feats Accomplished by Barcelona Star in La Liga 2019–20 Season.

Ronaldo is only the third Juventus player to score at least 30 goals in a single Serie A season after Felice Borel and John Hansen. Borel scored 31 Serie A goals in 1933/34 while Hansen netted 30 times in 1951-52. With four league games yet to play, Ronaldo could easily overtake both to become Juventus’ highest-scoring footballer in a single Serie A campaign. And to imagine he is 35 now!

When he scored from the spot against Lazio, Ronaldo became the first player to net 50 goals each in the English Premier League, La Liga and the Serie A. Ronaldo scored 84 goals in England’s top-flight, 311 in Spanish top-flight and now has 51 goals in Italian top-flight that too only in two seasons in Italy. Edin Dzeko had earlier become the first ever to net in the Bundesliga, Premier League and Serie A.

Ronaldo is also the fastest player to score 50 goals in the Serie A among players who made their debut since 1994/95. The Juventus forward got there in only 61 appearances breaking Andriy Shevchenko’s record. Shevchenko had created the record in 68 games in 2001-02.

Cristiano Ronaldo is the first Juventus player since 1952 to score 30 league goals in a single Serie A season. John Hansen, who scored 30 goals in the 1951/52 season, was the last player to achieve the feat.

Ronaldo has now scored 12 goals from the penalty spot in this Serie A campaign. That is the most number of goals a player has scored from the spot without missing a single kick. Roberto Baggio had scored 11 penalty goals in 1997-98 Serie A season.

Ronaldo continues to astonish his fans and followers with his goalscoring feats and with still four league games as well as the Champions League knockouts to play, the 35-year-old is certain to reach new milestones and accomplish more feats in the coming days.

(The above story first appeared on LatestLY on Jul 21, 2020 09:33 PM IST. For more news and updates on politics, world, sports, entertainment and lifestyle, log on to our website latestly.com).