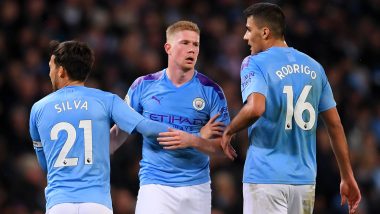 With the English Premier League done and dusted, Manchester City shift their focus on Cup competitions with a quarter-final clash against Newcastle United in the FA Cup. It has been a substandard season for Pep Guardiola and his men compared to their exploits last season but they still remain on course for at least two silverware with the EFL Cup already in the kitty. The loss to Chelsea in their previous game was a stark reminder of how the FA Cup holders fail to turn up for certain games this season. Newcastle United look set to beat the drop zone this term and can be a tough team to beat at home. Newcastle United versus Manchester City will be telecasted live on Sony Ten network from 11:00 PM IST onwards. NEW vs MCI Dream11 Prediction in FA Cup 2019–20 Quarter-Final.

Newcastle United have an excellent shot stopper in Martin Dubravka who will start between the sticks for the Magpies. Nabil Bentaleb is suspended for the tie while injuries to Ciaran Clark and Florian Lejeune rule them out. Dwight Gayle and Andy Carroll complement each other well in attack with the latter’s hold up play useful against a physically dominant team like Manchester City. Jonjo Shelvey despite not being fully fit will lead the Magpies’ charge in midfield. Pep Guardiola Unsure About Manchester City Future As Catalan Manager’s Contract Expires in 2021.

Sergio Aguero’s season came to a premature end after the Argentine went under the knife for a knee injury. Fernandinho’s red card against Chelsea denies Manchester City of an experience player in midfield with Rodri set to start as the defensive midfielder. Gabriel Jesus is likely to be flanked by Riyad Mahrez and Leroy Sane. The trio have pace and creativity and should stretch the Magpies defence that has looked edgy in the league.

Sony Sports is the official broadcaster of FA Cup 2019-20 in India. So fans can tune into Sony Ten 2 and Sony Ten 2 HD to catch the live action of Newcastle United vs Manchester City.

Where to Get Free Live Streaming of Newcastle United vs Manchester City FA Cup 2019-20 Football Match?

Newcastle United vs Manchester City Match in FA Cup 2019-20 can be viewed on OTT platforms as well. SonyLiv is the official streaming partner of Sony Sports so fans can catch the live action of the game on SonyLiv website and SonyLiv app. The last time these two sides met in the FA Cup, it was Newcastle United that came out on top of Manchester City. This time though it should be the visitors who will advance in the competition.

(The above story first appeared on LatestLY on Jun 28, 2020 04:28 PM IST. For more news and updates on politics, world, sports, entertainment and lifestyle, log on to our website latestly.com).