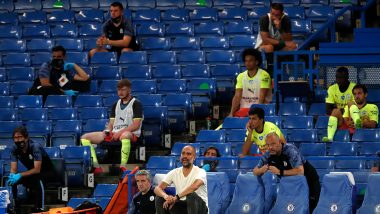 Pep Guardiola has been one of the best managers in the world for over a decade now and has led Manchester City to new heights during his four-year spell with the club. However, the Catalan manager still remains unsure about committing his long-term future to the four-time Premier League champions as the 49-year-old’s contract is set to expire at the end of 2020-21 season. Manchester City May Loose Pep Guardiola to Barcelona, Feels Former Winger Trevor Sinclair.

After two brilliant seasons, which saw Manchester City dominate English football, the current campaign has come as a reality check to Pep Guardiola and his side as they have been very much second-best to Liverpool, who were recently crowned as EPL champions and are 23 points ahead of the team from Manchester. Liverpool Crowned Premier League Champions, Euphoric Fans Celebrate Outside Anfield (Watch Videos).

Along with a poor showing in the domestic league, City’s European dream is also under threat as the club looks at a two-year ban from continental football if the UEFA Financial Fair Play ruling goes against them. Reports suggest that should the ban be confirmed, several star players and even Pep Guardiola will look to leave City.

Ahead of City’s FA Cup game against Newcastle United, when asked about his future, Pep stated that he is not thinking about the future and is focused on the current campaign. ‘I don’t want to think too far ahead. Now is not the time. I just think about today. I'm incredibly excited for this part of the season, and the next one’ said the Man City manager.

‘I am incredibly satisfied to be in this club and to try to do our best. I want the players to recover because the last 15-20 minutes were so demanding 10 against 11. We have a tough game against Newcastle and that's what I have to be focused on,’ he added.

Former Manchester City player, Trevor Sinclair recently stated that Pep could leave for Barcelona once his contract expires with the Premier League club. ‘Pep is Catalan through and through, and I feel that Barcelona is pulling him home and there’s a good chance he could end up back at Barcelona depending on what happens with the UEFA ban,’ Sinclair told talkSPORT.

(The above story first appeared on LatestLY on Jun 28, 2020 10:36 AM IST. For more news and updates on politics, world, sports, entertainment and lifestyle, log on to our website latestly.com).