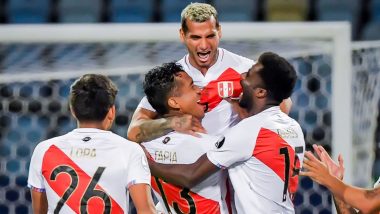 Yotun doubled the lead just before halftime with a superb reflex volley after Fabian Balbuena failed to make clean contact with a headed clearance, Xinhua reports.

The result left Peru fifth in the 10-team South American zone with 24 points from 18 matches. Ricardo Gareca's men will now meet either the United Arab Emirates or Australia in an intercontinental playoff, to be played over one leg in June. Brazil, Argentina, Uruguay and Ecuador secured the four automatic qualifying places in the South American Football Confederation (CONMEBOL) group. Mo Salah Misses Penalty After Being Targeted With Lasers During Egypt vs Senegal Clash in World Cup Qualifiers

In a dramatic last day of qualifiers, Colombia secured a 1-0 away win over Venezuela but fell one point short of a playoff spot. James Rodriguez put the visitors ahead with a penalty on the stroke of halftime but it was not enough for the Cafeteros, who will miss football's showpiece tournament for the first time since 2010.

Leaders Brazil completed their qualifying campaign with a 4-0 win over Bolivia in La Paz. Everton striker Richarlison scored twice while Lucas Paqueta and Bruno Guimaraes were also on target for the hosts.

The five-time world champions finished the qualifiers with an all-time high 45 points, beating the previous South American record of 43 set by Argentina in the 2002 campaign. The tally is even more impressive given that Brazil and Argentina still have a game in hand because of their suspended qualifier last September. In Santiago, Luis Suarez and Federico Valverde netted late goals as Uruguay signed off with a 2-0 win over Chile. C's strike - a spectacular overhead volley inside the six-yard box - made him the highest scorer in the history of South American qualifiers with 29 goals, one ahead of Lionel Messi. Cristiano Ronaldo Shares Message on Instagram After Portugal Qualify for FIFA World Cup 2022 (See Post)

Meanwhile, River Plate's Manchester City-bound striker Julian Alvarez scored on his full international debut as Argentina drew 1-1 with Ecuador in Guayaquil. Alvarez put the visitors ahead with a low effort in the 24th minute before Enner Valencia equalized in second-half stoppage time, firing home from close range after his penalty attempt was palmed away by Geronimo Rulli.

Meanwhile, Brazil manager Tite said he felt at peace after his team beat Bolivia 4-0 in La Paz to remain undefeated in the FIFA World Cup qualifying. Brazil secured their 14th win in 17 games on the last match day of the South American qualifying tournament.

"The performance exceeded our expectations," Tite said of Wednesday's result in the rarefied air of the Hernando Siles stadium, situated 3,600 meters above sea level. "The fact we were able to maintain our level and win by that margin in the face of such adversity surpassed anything that we could have hoped for."

Brazil now have 45 points from 17 matches in this qualifying campaign, a new South American record. The points tally could increase again in the coming weeks if Brazil's suspended home qualifier against Argentina is replayed, as expected. "The overriding feeling I have now is one of peace," Tite said. "We've all worked as hard as we possibly can to get to where we are."

(The above story first appeared on LatestLY on Mar 30, 2022 03:20 PM IST. For more news and updates on politics, world, sports, entertainment and lifestyle, log on to our website latestly.com).