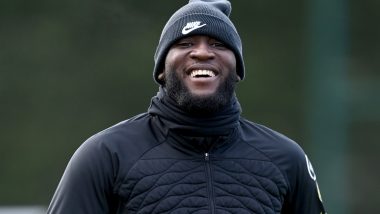 Milan (Italy), June 30: Romelu Lukaku is officially an Inter Milan player again after completing his season-long loan move from Premier League club Chelsea. The 29-year-old forward will go down as one of the biggest transfer flops in Premier League history and reportedly took a pay cut to secure his return to Italy after a miserable second spell at Chelsea. Inter will pay Chelsea a loan fee of 6.9m plus 3.5m in bonuses if they win the Scudetto, and will cover all his wages this season, reports Sky Sports. Romelu Lukaku Transfer Update: Belgian Striker Returns to Inter Milan for Season-Long Loan.

The Belgian striker's return was made official in a video posted on Inter's social media channels with Lukaku saying "we're back baby" while talking to chairman Steven Zhang on the roof of the club's headquarters. The Chelsea striker flew into Milan Linate airport around 6.20am local time and posed with an Inter scarf before getting in a car. "I'm so happy to be back," he said. Having completed his medical, Lukaku has officially been announced as a new Inter player. After the move was confirmed, Lukaku revealed he had remained in touch with Inter coach Simone Inzaghi after his departure last summer and was pleased to be back. Robert Lewandowski Transfer News: Barcelona To Submit a Third Bid For Bayern Munich Striker.

Asked what convinced him to return, he said, "The affection of the fans and my team-mates, but also the opportunity to work with the coach. I stayed in contact with him all last season. I think the coach is doing well with the team. I want to contribute and do good for this club." "It's like coming home. I think my family and I had a really good time in Milan thanks to the people, the fans and my team-mates. From the first day when I arrived here everyone helped me a lot, I'm really happy." Lukaku scored just eight goals in 26 Premier League appearances and was also dropped at the start of this year after giving an interview in which he said he was "not happy with the situation" at Chelsea and indicated he didn't like coach Thomas Tuchel's style of play.

(The above story first appeared on LatestLY on Jun 30, 2022 02:45 PM IST. For more news and updates on politics, world, sports, entertainment and lifestyle, log on to our website latestly.com).