Senegal Squad for 2018 FIFA World Cup in Russia: Lineup, Team Details, Road to Qualification & Players to Watch Out for in Football WC

The West African country will begin their 2018 World Cup campaign against Poland at the Otkritie Arena on June 19. 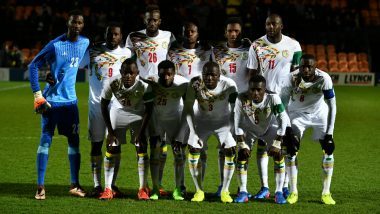 Senegal returns to World Cup action in Russia after a gap of 16 years and will be hoping there is a repeat the magic of the 2002 edition of the World Cup where they reached the quarter-finals of the competition and famously beat the French side on their way through. But Senegal knows the status of their present squad and The Teranga Lions will be out there in Russia more to enjoy their football than to get into the complexities of going far in the tournament with unwanted pressure. Their head coach is Aliou Cisse, the man who captained the 2002 Senegal squad. He has announced  the final 23-man squad for the 2018 FIFA World Cup and noticeable absentee in the team lineup of Senegal is Oumar Niasse. FIFA World Cup 2018 Schedule in IST for PDF Download: Fixtures, Groups, Time Table with Match Timings & Venue Details of Football WC in Russia.

The defense is made up of Kalidou Koulibaly and Kara Mbodji, with the later missing quite a lot of matches due to injury and the coach going ahead with his name in the 23-man squad taking a huge gamble. Lamine Gassama and Salif Sane are the other two notable men in the defense which will have a huge role to play in Senegal’s campaign. 2018 FIFA World Cup Friendlies Fixtures: Check Full Warm-Up Schedule Timetable in Indian Time for Germany, Brazil, Spain, England, Argentina and All 32 Countries.

The midfield consists of players mainly plying their trade in the English league with Pape Alioune Ndiaye of Stoke Kouyate, Idrissa Gueye of Everton and Cheikh Ndoye of Birmingham almost certain to start every match Senegal plays in Russia. Ismaila Sarr of Rennes is another exciting name who is certain to get a run out in the middle for Senegal. The attack has one of the most promising names of European football, Sadio Mane who had a dream season with Liverpool. Mame Diouf of Stoke City will be entrusted to share the workload of Mane in the World Cup.

Senegal topped Group D of the CAF World Qualifiers with 14 points and safely progressed to the World Cup 2018 in Russia. They won four out of six matches they played with Cheikh N’Doye and Diafra Sakho their leading scorers in the qualifiers with two goals each.

Senegal was close to qualifying to the FIFA World Cup in 2014 but were knocked out by Ivory Coast 4-2 in the fourth round of CAF World Cup qualifiers and thus ending their dream of playing in Brazil.

Sadio Mane: The Liverpool forward has been one of the most potent attacking forces in the season gone by if we take the top leagues of the world under consideration and his ability to make those runs from wide and get in dangerous areas in opposition box makes him extremely crucial to his teams cause. Although he got a single goal for his country in the qualifiers, expect Mane to rise to the occasion in Russia.

Idrissa Gueye: He has easily been one of Everton’s best players this season with football pundits singing praises of him. Coming to a tournament like a World Cup with such rich vein of form will lift the mood of the entire squad, and Gueye’s presence will be vital.

The West African country will begin their 2018 World Cup campaign against Poland at the Otkritie Arena on June 19. In the run-up to world cup, Senegal will be playing few friendlies like against Luxembourg on May 31 Stade Josy Barthel, Luxembourg. Their second warm-up game is against Croatia  on June 8 at Stadion Gradski vrt in Osijek, Croatia and last is against South Korea on June 11. The venue of their last friendly game before finals is yet to be decided.

(The above story first appeared on LatestLY on May 28, 2018 09:11 PM IST. For more news and updates on politics, world, sports, entertainment and lifestyle, log on to our website latestly.com).