Barcelona are already looking to sign Sergio Aguero and have held initial talks with representatives of Manchester City striker over a free transfer this summer. The 32-year-old is the leading scorer for Manchester City, netting 258 goals in 387 appearances for the club. 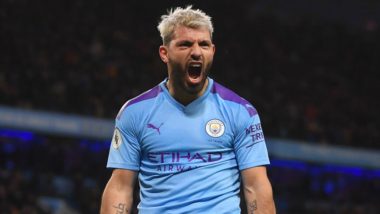 Manchester City star Sergio Aguero’s contract with the club is coming to an end after this season and the Argentine will be leaving after a decade in Manchester on a free transfer in the summer. Several clubs across Europe will be interested in occupying the services of the 32-year-old and among them are Catalan giants Barcelona, who are in search of a center-forward. Sergio Aguero to Leave Manchester City: Top Clubs Who Could Sign Argentine Striker in Summer.

According to a recent report from Sky Sports, Barcelona are already looking to sign Sergio Aguero and have held initial talks with representatives of Manchester City striker over a free transfer this summer. The 32-year-old is the leading scorer for Manchester City, netting 258 goals in 387 appearances for the club. Juventus Reportedly Keen to Sign Manchester City Striker in Summer.

A move to Barcelona will be a smart choice for both parties as the Catalan giants are looking for a striker to replace Luis Suarez and the Argentine has a similar pedigree and can get regular game-time at the club if he manages to find his form. Barcelona are also hopeful that Aguero can persuade Lionel Messi to remain at the club beyond this summer.

The Argentine is targeting a treble in his final season at Manchester City as the club are in the finals of the Champions League and are on the verge of adding a Premier League title to the league cup triumph. The 32-year-old has hardly featured this season as injuries and a COVID-19 diagnosis has kept him out for the most part of the season.

Sergio Aguero has made only 17 appearances for Manchester City this season and scored just his fourth goal of the season against Crystal Palace on Saturday. Sergio Aguero has previously played in La Liga, representing Atletico Madrid, representing them for five years, winning the 2010 Europa League and the UEFA Super Cup.

(The above story first appeared on LatestLY on May 07, 2021 05:03 PM IST. For more news and updates on politics, world, sports, entertainment and lifestyle, log on to our website latestly.com).