Manchester City star Sergio Aguero has announced that he will be leaving the club in the summer once his contract expires. The Argentine joined the Premier League side in 2012, leading them to several titles, including helping them end a 40-year wait for domestic league glory. 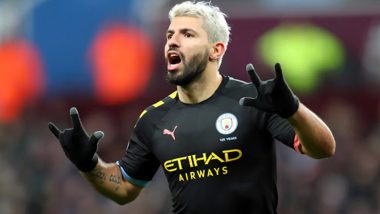 Manchester City star Sergio Aguero has announced that he will be leaving the club once his contract expires in the summer. The Argentine joined the Premier League side in 2012, leading them to several titles, including helping them end a 40-year drought for domestic league glory. So as Man City’s record goal-scorer calls time on his stay, we take a look at some clubs who can sign him in the next transfer window. Manchester City Star Sergio Aguero To Leave Club in Summer.

Now 32, injuries have hampered Sergio Aguero’s last few years at Manchester City as the Argentine has been limited to just eight appearances in the league this season, starting only twice since October and scoring once in the time-frame. Despite his recent struggles, Aguero still remains one of the top strikers in world football and could be a vital addition for any team if he manages to stay fit.

The Catalan giants are one the clubs who could do with the services of Sergio Aguero as the 32-year-old will arrive as a free agent and given their financial condition it is a big plus. The Argentine is a proven goal-scorer, something which Barcelona needs at the moment and also has a good relationship with star man Lionel Messi.

The Italian clubs in recent years have preferred great strikers who are in the latter stages of their career and Sergio Aguero certainly fits the bill. With Cristiano Ronaldo doing the bulk of scoring for the Bianconeri, the arrival of Sergio Aguero could help ease the pressure of the Portuguese’s shoulders and help them reach the next level they certainly lack this season.

The Parisian club boasts some of the greatest attacking talents in world football and the arrival of Sergio Aguero will only make them stronger. There are doubts over Kylian Mbappe’s future at the club and with Neymar Jr’s fitness issues, the Argentine could chip in with much-needed goals for Mauricio Pochettino’s side. The move also makes sense for the Argentine given PSG’s dominance in France.

Major European and South American stars moving to Major League Soccer late in their careers has been a common trend in football in recent years and Sergio Aguero could follow suit. The American league offers great competitiveness and has been one of the fastest-growing leagues, which can be boosted further with the addition of the Argentine.

The 32-year-old started his professional footballing career with the Argentine club back in 2003 and could return back in the summer. However, it could be highly improbable as a move to another top European club might be Sergio Aguero’s first priority at the moment.

(The above story first appeared on LatestLY on Mar 30, 2021 09:24 AM IST. For more news and updates on politics, world, sports, entertainment and lifestyle, log on to our website latestly.com).