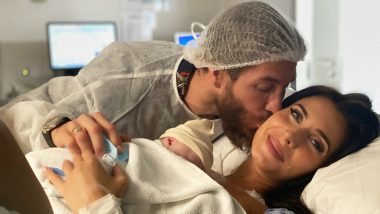 Real Madrid skipper Sergio Ramos became a father for the fourth time as his wife Pilar Rubio gave birth to yet another baby boy, Maximo Adriano, on Sunday (July 26, 2020). The Spanish defender shared the news with his fans on social media platforms where he announced that both the Mom and baby are perfectly fine. The couple are parents to three boys Sergio (five), Marco (four) and Alejandro (two). Sergio Ramos Impressed With Conor McGregor's Football Skills, Invites Former UFC Fighter to Real Madrid Training.

Sergio Ramos took to Instagram to announce that he and his wife Pilar are welcoming a fourth child into their lives. ‘Immensely happy to be able to introduce Máximo Adriano.’ The Spain international wrote. ‘He was born at 6:56 p.m. and weighed 3.270kg. Mom and baby are perfect. Always proud of you, my love @PilarRubio_. I love you to pieces!’ the 34-year-old added. Real Madrid Thanks Fans After Winning the La Liga 2019-20, Says ‘We Couldn’t Have Done It Without You!’

Pilar Rubio announced her pregnancy earlier this year in January on the Spanish TV show, she stars in. The couple got married in June last year in a star-studded ceremony at Seville Cathedral after being together for seven years. The Real Madrid legend started his football career with Sevilla, coming through the youth ranks of the Andalusian side.

Speaking of Sergio Ramos, the defender guided Real Madrid to their first La Liga title in three years and in doing so broke the record for most goals scored by a defender this century in Spain’s top-flight footballing division.

The Real Madrid skipper will now turn his attention towards the Champions League as he and Los Blancos will try and overturn the 2-1 defect against Manchester City from the round of 16 first leg, when the continental competition resumes back in August from the coronavirus enforced suspension.

(The above story first appeared on LatestLY on Jul 27, 2020 03:15 PM IST. For more news and updates on politics, world, sports, entertainment and lifestyle, log on to our website latestly.com).