Real Madrid Thanks Fans After Winning the La Liga 2019-20, Says ‘We Couldn’t Have Done It Without You!’ 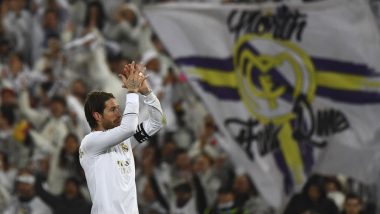 A couple of days ago Real Madrid clinched their 34th   La Liga title and now the Los Blancos have thanked the fans who had supported the team throughout the season. The official account of Real Madrid took to social media and posted a picture of Real Madrid captain Sergio Ramos waving out to the crowds. “Thanks, #RMFans for your support during the 2019/20 @LaLiga season! We couldn't have done it without you! #34Ligas | #HalaMadrid,” read the caption of the snap. A few days ago, even Sergio Ramos dedicated the trophy to the ones who lost their lives to the deadly coronavirus. Barcelona Reacts After Real Madrid Win La Liga 2019-20 Title, Check Tweet.

Until March 2020, the fans made an appearance to cheer for their respective teams. But after the outspread of the coronavirus, the sporting activities all across the world were brought to a halt. The sporting activities were not happening for about three months now. However, in the month of June, the football associations decided to begin with the sport with the utmost precautions for the players and the officials. One of the biggest steps was that the matches were played behind closed doors in the absence of fans.

In these circumstances like these, the fans supported their favourite team via social media.  Thus the Los Blancos thanked the fans. Check out the tweets below:

I'm very proud of this LaLiga title. Because victory, in football and in life, comes from fighting together to the end. I would especially like to remember all our supporters who have passed away or who have lost loved ones to this terrible virus. This one’s for you.#HalaMadrid

The team celebrated their title win after they won against Villarreal. The team ended their La Liga season with a draw against Leganes. The Los Blancos were hosted by Leganes and the game ended with 2-2 draw.

(The above story first appeared on LatestLY on Jul 21, 2020 05:03 PM IST. For more news and updates on politics, world, sports, entertainment and lifestyle, log on to our website latestly.com).