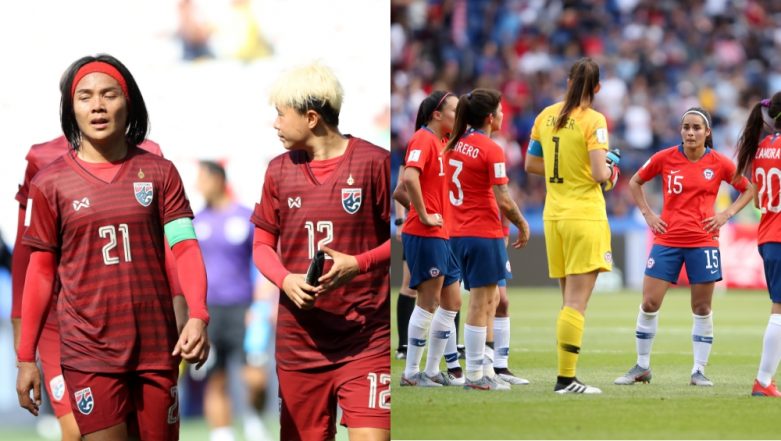 Both Thailand and Chile will aim for their first victory in FIFA Women's World Cup, 2019 when they face each other in a Group F encounter at Stade de la Route de Lorient in Rennes, France. This match will be the third and final game for both these countries. Winless in their both FIFA World Cup 2019 matches, Thailand and Chile will be rearing to register their first win in the competition. Both these countries are ranked in the mid-30s in the latest FIFA rankings, which should make it an equally contesting and entertaining match. Meanwhile, the fans in India, who are searching for the live telecast and free live streaming online of Thailand vs Chile Group F game of FIFA Women's World Cup, 2019, can scroll down for all the required information. FIFA Women's World Cup 2019: From Teams to Schedule And Venues, All You Need to Know About the Football Mega Event.

Thailand was humiliated 0-13 by defending champions United States in their opening match of the 2019 World Cup. They bounced back with a spirited performance against Sweden but till lost 1-5 which knocked them out of the tournament. But the match saw them scoring their first goal in this World Cup edition somewhat reliving their record of suffering the biggest ever Women’s World Cup defeat. Chile too lost both of their matches against the superior ranked teams but are yet to net their maiden Women’s World Cup 2019 goal. Not only can the fans catch both the live telecast and online free live streaming of this match but also watch the highlights on the FIFA World Cup Youtube channel. FIFA Women's World Cup 2019 Schedule Free PDF Download in IST: Fixtures, Groups, Time Table in Indian Time with Venue Details of Football WC in France.

Thailand vs Chile game will take place on June 21, 2019 (Friday), at Stade de la Route de Lorient in Rennes, France. This is the third match of both Thailand and Chile in Group F at the 2019 FIFA Women’s Football World Cup and the start time is at 12:30 AM IST.

Thailand vs Chile match will be live telecast on Sony ESPN and Sony ESPN HD TV channels. Sony Pictures Networks holds the broadcast rights of FIFA Women’s Football World Cup 2019 in India and has been broadcasting all the matches.

In case you are not able to watch the match live on television, you can also catch Thailand vs Chile FIFA Women’s Football World Cup 2019 match through the Sony Liv app. Sony Liv will be live streaming the match. Fans can also catch up on the live updates of the game on the official website of FIFA.