FIFA Women's World Cup 2019: From Teams to Schedule And Venues, All You Need to Know About the Football Mega Event

Learn everything you need to know about the 2019 FIFA Women's World Cup event here, including the schedule and the teams competing. 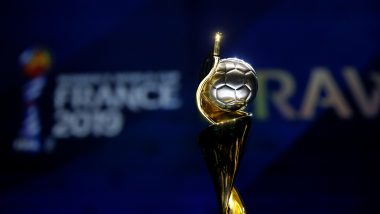 The first match will be played between hosts France and the Republic of Korea on Friday at the Parc des Princes. The match will be played at 21:00 local time. In India, the match will be telecast live at 12.30 AM Indian Standard Time - (IST). The final match will take place on July 7 in France's capital city of Lyon. Women's Football World Cup 2019: Google Kicks Off the FIFA Tournament With a Spirited Doodle.

(The above story first appeared on LatestLY on Jun 07, 2019 09:08 AM IST. For more news and updates on politics, world, sports, entertainment and lifestyle, log on to our website latestly.com).