Brazil have been sensational in the World Cup Qualifiers so far winning all of their eight games and lead the points table. Tite’s men will be aiming to continue that winning run, extending the gap over second-placed Argentina. Meanwhile, Venezuela are at the bottom of the points table and are entering the game on the back of three consecutive defeats. 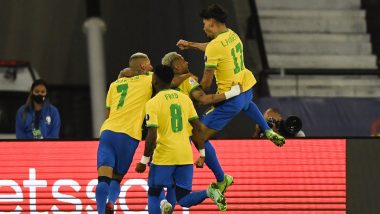 Brazil are currently leading in the South American World Cup qualifiers with 24 points from 8 games. The Samba boys are yet to drop points against any team which tells us about the kind of football Tite has got them playing. Though the loss against Argentina in the Copa American finals still hurts the fans, the team is growing in strength and could finally have a side that can help them become world champions again. A game against struggling Venezuela looks easy on paper and Brazil should secure an easy win. With 4 points from 9 games, Venezuela have failed to get going in their road to qualification and it could well be more about damage control for them than looking to play freely against Brazil. Meanwhile, fans searching for Venezuela vs Brazil, CONMEBOL World Cup Qualifiers live streaming can scroll down below. Brazil 2–0 Peru, FIFA World Cup 2022 CONMEBOL Qualifiers: Neymar on Target As Selecao Extend Unbeaten Run, Retain Top Spot in Points Table.

Star forward Salomon Rondon has made himself unavailable for selection and will not feature against Brazil. Jefferson Savarino and Mikel Villanueva are injured while Yangel Herrera, Romulo Otero and Jhon Murillo have all been left out  of the squad. Tomas Rincon in midfield is the workhorse in this side and his role is crucial as he looks to shield the backline.

Roberto Firmino and Richarlison are two first-team players missing in action for Brazil owing to injuries. Neymar will sit out of the Venezuela game due to suspension and in his place we can see Everton Ribeiro in the side. Fabinho will team up with Lucas Paqueta in midfield with Casemiro missing out due to a tooth infection.

When Is Venezuela vs Brazil Match Scheduled to Take Place? Date, Time and Venue of CONMEBOL 2022 World Cup Qualifier?

The match between Venezuela vs Brazil clash in 2022 FIFA World Cup Qualifiers CONMEBOL will be played at the Olympic Stadium in Caracas, Venezuela. The match is scheduled to start on October 08, 2021 at 05:00 AM IST (Indian Standard Time).

Unfortunately, Venezuela vs Brazil match will not be live telecasted in India as there are no official broadcasters available for the 2022 FIFA World Cup CONMEBOL qualifiers in India. Fans will therefore not be able to catch the live-action of the CONMEBOL match on their television sets.

Since there are no official broadcasters available for the 2022 FIFA World Cup CONMEBOL qualifiers in India, fans will also not be able to watch Venezuela vs Brazil match online. But fans can always follow the match on social media handles of both teams.

Brazil’s squad depth enables them to replace star players with ease. They will dominate this game from the onset and should secure a routine 0-3 win.

(The above story first appeared on LatestLY on Oct 07, 2021 09:16 PM IST. For more news and updates on politics, world, sports, entertainment and lifestyle, log on to our website latestly.com).