Wojciech Szczesny Fires Cristiano Ronaldo Warning to Lyon Ahead of Champion League 2019-20 Match, Says ‘He Is Ready to Perform Another Miracle’ 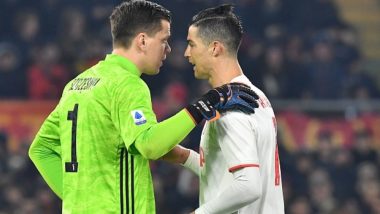 Cristiano Ronaldo (R) talks to Juventus' Polish goalkeeper Wojciech Szczesny prior to Rome shooting a penalty kick during the Italian Serie A football match AS Roma vs Juventus on January 12, 2020 at the Olympic stadium in Rome. (Photo by Tiziana FABI / AFP) (Photo Credits: Getty)

Cristiano Ronaldo has been in red hot form for Juventus ever since the start of the year. He has been quite a vital man for the Bianconeri as they lifted the Serie A 2019-20 title. Now, ahead of the Champions League 2019-20 tie against Lyon, Juventus goalkeeper Wojciech Szczesny has fired a warning to their opponents and has said he is ready to perform another miracle. The game will be played on August 8, 2020, at the backyard of the Bianconeri. The home game for Juventus has Lyon leading with 1-0 aggregate. The two teams met each other in February in a reverse fixture where the hosts Lyon walked away with the last laugh. Fans Say, ‘Cristiano Ronaldo Robbed of MVP’ After Serie A Selects Paulo Dybala as the Winner Despite Having Fewer Goals than CR7.

Szczesny said that nobody on earth can doubt the abilities of Ronaldo and makes a difference at decisive times.  "We can do it again this year, again Ronaldo's hat-trick? Nobody in the world has doubts that Cristiano can do it again. As usual, at the decisive times he makes the difference, he is ready to perform another miracle," said the Juventus goalkeeper during an interview. A couple of days ago Juventus declared their squad for the Champions League where Sami Khedira has been ousted from the squad.

Talking about Wojciech Szczesny he has won Serie A award in the  Best Goalkeeper category. Whereas, Cristiano Ronaldo was snubbed from receiving an award for the Most Valuable Player. It was his Juventus teammate Paulo Dybala who walked away with the honour despite having fewer goals than him. Ronaldo has scored 31 goals for Serie A in this season.

(The above story first appeared on LatestLY on Aug 06, 2020 12:30 PM IST. For more news and updates on politics, world, sports, entertainment and lifestyle, log on to our website latestly.com).