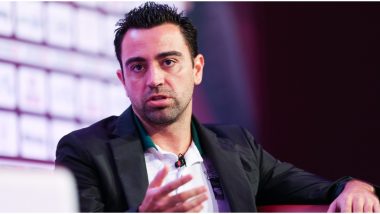 Barcelona president Josep Maria Bartomeu has publicly backed manager Quique Setien to continue as the club’s head coach next season despite admitting that it is only a matter of time before former club midfielder Xavi Hernandez takes over the reins at Barcelona. Bartomeu revealed that former Spanish playmaker will “sooner or later” become the club’s manager but his board is ready to back Setien for next season despite disappointing results this season. Lionel Messi Transfer News: Barcelona President Josep Maria Bartomeu Insists Argentine Will Finish Career at Camp Nou.

Setien, who replaced sacked Ernesto Valverde as the head coach in January this year, has failed to change the club’s direction with its performances. Barcelona were on top of the La Liga points table and led second-placed Real Madrid by a number of points but has now fallen a point behind the Los Blancos and could, for the first time in three seasons, end without the League title. Zinedine Zidane-coached Madrid are the favourites to win the La Liga title this season with only three games remaining. Xavi Hernandez Ends Barcelona Speculations, Signs Contract Extension with Al-Sadd in Qatar.

The drop in the points table added to recent disappointing results and a lacklustre display has given away to rumours that Setien could be sacked at the end of the current season with Xavi favourite to replace the former Real Betis man at Camp Nou. But Bartomeu has revealed that despite recent displays, the club still has faith in Setien and expects the 61-year-old to continue as the manager next season.

"Xavi will be Barca's coach, sooner or later. But right now we are not looking for a coach, we are with Quique," Bartomeu was quoted by Goal as telling TV3. “Quique Setien will coach the team in the Champions League and these last two Liga games that are left. We have had a very atypical season, we will play in August and he will be the coach. If we overcome Napoli, we will be in Lisbon.

"Our will is to fulfil contracts and Setien has one. We went to Setien's house to speak about the future, the plans for next season. He will probably be there and I am very interested to hear what he thinks,” Bartomeu added. "He has a lot of time for Riqui Puig and Ansu [Fati]. We have seen Pedri and [Francisco] Trincao in form, there is hope.”

Barcelona’s new hopeful president and candidate Victor Font, however, sees no future for Setien at the club and wants to bring Xavi back to Camp Nou. According to Font, Setien is not the type of coach, the club should be backing “for the future” and Xavi will be a better suit as he already knows the club’s DNA and its philosophy.

“He's the current Barca coach so for that reason alone he deserves all our respect and support. For me personally he's a coach I've always liked but it's true too that he's not the coach we're backing for the future,” Font told Ole. He also believes that Xavi will be a Barcelona coach when he decides and will be backed by whoever is the club president.

“It's true that Xavi will be the coach when he decides, whoever is president because Xavi is Barcelona and their biggest hope. I'm sure there will not be another project that has worked for so long to ensure that the sporting project that Xavi has in his head can be executed with the maximum chance of success,” Font said.

“Xavi perfectly fits the profile of a player from here, formed in the youth academy, and knows and defends the style we defend ourselves. In the case of having the honour to be in charge, he will be the centre around which the whole football project will pivot in the coming years.”

Meanwhile, Xavi, 40, signed a one-year contract extension with Qatar club Al-Sadd keeping him at the club until 2021 which has somewhat quashed all speculations of him joining Barcelona next season. He is, however, said to be readying himself for the big job.

"The biggest hope I have now is to be Barca coach and get Barca back to winning ways," Xavi told Sport las month. "Not me but these players and Barca triumphing. And as a consequence, our technical staff, who are preparing for it a lot and it makes us really excited. I'm a club man. I would like to return at the right moment to start a project from zero. I've said it a lot of times but I want to take footballing decisions at Barcelona.”

(The above story first appeared on LatestLY on Jul 13, 2020 10:02 AM IST. For more news and updates on politics, world, sports, entertainment and lifestyle, log on to our website latestly.com).