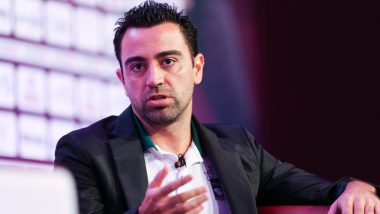 Doha, July 5: Former Spain midfielder Xavi Hernandez poured cold water over a potential move back to Barcelona in the capacity of manager as he signed a contract extension at his current club Al-Sadd in Qatar. The former Barcelona playmaker, who manages the Doha-based outfit, has extended his current contract that will now run till 2021. "I am happy to continue with Al-Sadd, and the team's goal will always be to compete for all titles," Xavi was quoted as saying in the statement uploaded on club's Twitter handle.

"I am happy that the squad is complete today after the return of the remaining first team players, in preparation for this upcoming period and the resumption of the league championship." Xavi Hernandez Reveals Why He Turned Down Head Coach Job at FC Barcelona.

Xavi was touted as one of the favourites to land the top job at Camp Nou as reports related to a rift between players and current Barca coach Quique Setien intensified in the last couple of weeks. Talisman Lionel Messi, who has been at Barcelona since the age of 14, has also been linked with a move away from the club due to the reported unrest with the organisation. Xavi, himself, had last month talked about his 'hope' of becoming the coach of the Catalan giants in the near future.

"The biggest hope I have now is to be Barca coach and get Barca back to winning ways. Not me but these players and Barca triumphing. And as a consequence, our technical staff, who are preparing for it a lot and it makes us really excited," Xavi had said during a video conference as per sport.es. "I'm a club man. I would like to return at the right moment to start a project from zero. I've said it a lot of times but I want to take footballing decisions at Barcelona."

(The above story first appeared on LatestLY on Jul 05, 2020 11:45 PM IST. For more news and updates on politics, world, sports, entertainment and lifestyle, log on to our website latestly.com).