As the older generation departs having stamped their mark in the sporting industry, the new generation starts taking over rebuilding a legacy and achieving stardom. From Serena Williams to Mithali Raj and Carli Lloyd, women have always been terrific ambassadors of the game. As the global icons near the twilight of their career, a new generation awaits them. 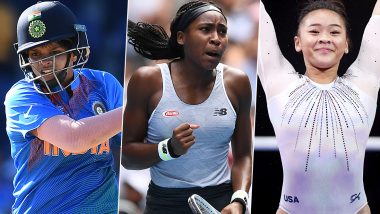 They have broken barriers, shattered the stereotype brick walls and have always jumped higher – if not equal – than men in everything they have pursued. They “the women” are celebrated on this day. March 08 of every ear is observed as the “International Women’s Day. A day when womanhood is celebrated. And what’s better than celebrating women in sports. Over the years women have revolutionised the “sports” genre and have dominated it. Women have always proved their mettle in the sporting world with performances sometimes “eye-catching” most times “sensational” and “legendary.” As the world celebrates International Women’s Day, we take a look at some rising female sports stars that can have a massive impact on the game in future. International Women’s Day 2020: Mithali Raj, Sania Mirza, PV Sindhu and Other Female Sports Personalties Who Made India Proud.

From Cricket to gymnastics, sports have produced some of the greatest female icons in society. Superstars, who not only conquer the sporting world but are also role models to many young dreamers. As the older generation departs having stamped their mark in the sporting industry, the new generation starts taking over rebuilding a legacy and achieving stardom. From Serena Williams to Mithali Raj and Carli Lloyd, women have always been terrific ambassadors of the game. As the global icons near the twilight of their career, a new generation awaits them.

She is American, plays tennis and is 15-years-old. You have certainly heard that before. But Cori ‘Coco’ Gauff looks like she could eclipse them all in the tennis court. Inspired by the Williams to take the Tennis game, Coco Gauff rose to prominence by beating the elder of the Williams sisters (Venus Williams) in her maiden senior Grand Slam outing.

At the 2019 Wimbledon Championship, Coco upset Venus and left the stands numb and quiet with a straight-sets win against the five-time Wimbledon champion. She returned the very next year and beat Venus again this time at the 2020 Australian Open and it wasn’t an upset the second time. Coco also beat defending champion Naomi Osaka at the same Grand Slam tournament and is already tennis’ most promising star to watch out for.

The “Virender Sehwag” of women’s cricket. Well, she could become the Sehwag of women’s cricket especially with the straight lift over the bowler’s head standing still in her crease that in so many ways resembles the “Sehwagesque” style of batting. But she is Shafali Verma, the next big thing in Indian cricket, one of the most promising women’s cricketers of this generation. And she is only 16. Verma is currently the World No 1 T20I batsman in women’s ICC batting rankings and also the fourth-highest run-scorer in the ongoing 2020 Women’s T20I World Cup.

You talk of an American gymnast and you can hardly go beyond the marvellous and incredible Simone Biles, an artist gymnast with 30 Olympic and World Championship medals that make her the most decorated American gymnast of all-time. But here we are talking about a gymnast that isn’t Simone Biles and is only 16-years-old. Yet at the national trials for the 2019 World Championships, Sunisa finished second to only the legendary Biles and lost to her by only 0.350 points. She was part of the US team that swept the World Championship event and will be next seen at the Stuttgart World Cup. Already a star in the making.

She isn’t as young as the first three. But Patricia Guijarro can be said to be among the most promising young women’s footballers to watch out for. At 21, she has already established herself as one of the best midfielders of world football. She plays for FC Barcelona and has been a hit for them as she has been for the Spain national team. She won the Golden Boot and the Golden Ball at the Women’s U20 World Cup in France and led Spain to finish runners-up in the tournament, having already guided her national team to the U17 and U19 women's championship in 2014/15 and 2017.

Hima Das is 20 and has already been nicknamed the “Dhing Express.” The word ‘Dhing’ symbolising the place she originates from and ‘Express’ denoting her pace in the sprint world. At 18, she put India on the map of sprints with a historic gold medal at the IAAF Under20 World Championships. She has already won medals at the Asian Games – gold in the women’s 4x400m and mixed 4x400m and a silver at the individual 400m event. Hima Das is India’s next big sprint athlete to watch out for.

(The above story first appeared on LatestLY on Mar 08, 2020 10:12 AM IST. For more news and updates on politics, world, sports, entertainment and lifestyle, log on to our website latestly.com).