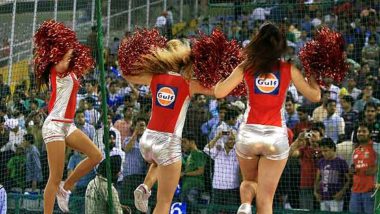 Even in its inaugural season, the Indian Premier League (IPL) had taken the cricket fraternity by storm. However, not everyone could come to terms with the concept of live bands, firecrackers, and most significantly, cheerleaders. The concept did not sit well with Indian culture, they said. Thankfully, it did not escalate into anything major.  IPL Controversies- Part 1: Indian Premier League 'Kills' Indian Cricket League in 2008.

But amidst all this, something really serious happened. On their return to London, Ellesha Newton (the daughter of a UK racial equality officer) and Sherinne Anderson raised allegations of racism against Wizcraft International Entertainment, who handled Kings XI Punjab (now Punjab Kings).

The two cheerleaders complained about being addressed as ‘ni**ers’, and were told that ‘people here don’t want to see dark people’. ‘They only wanted beautiful white girls,’ Newton told the Sun. IPL Controversies- Part 2: Slapgate Incident Involving Harbhajan Singh and S Sreesanth in 2008.

Anderson and Newton were allowed back on the podium only once Jorge Aldana, the Director of Fierce Performance Production, intervened. Fierce had bought the team of cheerleaders from London.

The incident had taken place during Punjab’s first ever IPL match, on April 19, 2008 at Mohali, against Chennai Super Kings. Wizcraft had subsequently sacked them and dismissed the allegations as ‘fabricated’.

The BCCI expressed their surprise. ‘We have not received any complaint from any cheerleaders that they were asked to leave by the Mohali-based Kings XI Punjab franchise recently because of the colour of their skin,’ BCCI joint secretary MP Pandove told the media. BCCI also promised a probe only if an official complaint was launched to IPL Commissioner Lalit Modi. The matter fizzled out.

(The above story first appeared on LatestLY on Apr 05, 2021 12:51 PM IST. For more news and updates on politics, world, sports, entertainment and lifestyle, log on to our website latestly.com).