After the match, S Sreesanth of Kings XI Punjab approached Harbhajan Singh of Mumbai Indians. To the astonishment of many, Harbhajan slapped Sreesanth; and Sreesanth broke down. 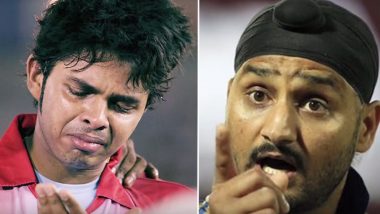 Kings XI Punjab beat Mumbai Indians by 66 runs in an IPL league match on April 25, 2008 at the Wankhede Stadium. The exact chain of events that followed remains unknown as cricketers were having the customary handshake with cricketers of the opposition. S Sreesanth of Punjab approached Harbhajan Singh, who was leading Mumbai in lieu of the injured Sachin Tendulkar. Seconds later, much to the astonishment of many, Harbhajan slapped Sreesanth, and the latter broke down into tears. IPL Controversies- Part 1: Indian Premier League 'Kills' Indian Cricket League in 2008.

Punjab captain Yuvraj Singh later informed that Harbhajan had visited the Punjab dressing-room and apologised to Sreesanth. Harbhajan, however, refused to comment in the post-match press conference.

It later transpired that the Mumbai cricketers at the dugout were not too happy with Sreesanth’s celebrations during the match. Amish Saheba, one of the two umpires in the match, later told that he and Aleem Dar had warned Sreesanth for his over-the-top reactions. IPL 2021 Schedule in PDF for Free Download: Get Indian Premier League 14 Venues, Full Time Table, Fixtures and Match Timings in IST.

Whatever it was, it did not bode too well for Harbhajan. The BCCI launched a probe into the matter. They appointed Sudhir Nanavati for the same. Based on the findings, the BCCI banned Harbhajan for the rest of the season. Shaun Pollock led Mumbai until Tendulkar was available again.

While no public video of the slap exists, there are photographs of a crying Sreesanth. However, as per ESPNCricinfo, the BCCI verdict was based upon video evidence collected from one of the 21 television cameras on the ground. Over years, Harbhajan has expressed remorse for the incident. The two cricketers have since been on good terms.

(The above story first appeared on LatestLY on Apr 05, 2021 12:18 PM IST. For more news and updates on politics, world, sports, entertainment and lifestyle, log on to our website latestly.com).