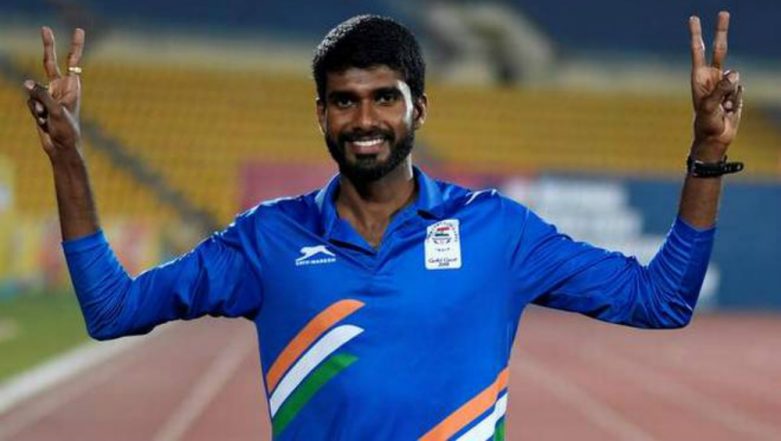 After a long, long wait on Day 12 of Jakarta Palembang 2018 Asian Games, it is Jinson Johnson who brings a big smile on every Indian fans’ face with a gold medal winning performance. The Indian Olympic athlete bagged the gold medal in Men’s 1500m on Thursday to take India’s medal tally to 56, which now stands at 12 gold, 20 silver and 25 bronze medals. India’s Manjit Singh missed the bronze medal by a whisker in the same event. Asian Games Medal Tally 2018 Updated: Jinson Johnson Wins Gold, Takes India's Medal Tally to 57 in Current Table and Country-Wise Medal Standings.

At the Men’s 1500m finals, Jinson Johnson clocked 3:44.72 time to emerge victorious. He defeated Amir Moradi of Iran and Mohammed Tiouali of Bahrain who bagged silver and bronze medals riding on 3:45.62 and 3:45.88 timings. Manjt finished his race with 3:46.57 time. In the 800m finals, Manjit Singh had won the gold medal while Jinson settled for the silver medal. This is indeed the best show by an athlete at the 18th Asiad.

The 27-year-old from Kerala has had an incredible year with the two-time Asian championship medallist Jinson Johnson breaking Sriram Singh’s four-decade-old National record in the men’s 800m title at the National inter-State athletics championships in June. And now he amps up his performance to beat the best of Asian athletes in the international multi-sports tournament.

Jinson Johnson took up the athletics at the age of 11 after he as introduced to the sport by a friend. "In my village I had a friend called Jitesh who harboured the same interest in sports, and together we started going on runs early in the morning."

Earlier, Seema Punia too bagged bronze medal in Women’s Discus Throw. She had bagged a gold medal at the 2014 Incheon Asian Games. India has been incredible in athletics bagging the greatest number of medals, 17 in any contingent this edition. It includes six gold, nine silver and two bronze. Well done, Team India!