U Mumba vs U.P. Yoddha, PKL 2018–19, Eliminator 1 Match Live Streaming and Telecast Details: When and Where to Watch Pro Kabaddi League Season 6 Match Online on Hotstar and TV? 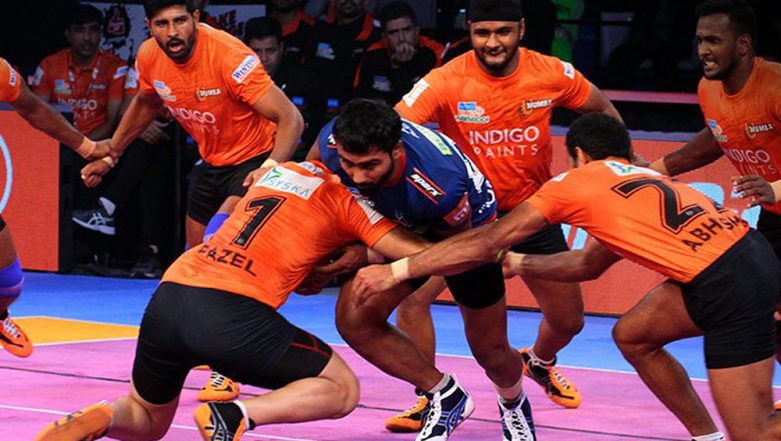 The league stage matches are done and over with at the Pro Kabaddi League (PKL) Season 6. It will be U Mumba and U.P. Yoddha in the first match, Eliminator 1, on December 30. If you are looking for the live telecast or online streaming details of the PKL Playoff match, then you can find the relevant information of the PKL 2018-19 match here.

In their head-to-head record, both the teams have played only 3 times against each other in the history of the PKL. In their rivalry, U Mumba has been a step ahead of their opponents by winning 2 matches, while U.P. Yoddha has only once. Pro Kabaddi League 2018-19 Schedule Timetable: Full Fixtures, All Teams' Match Dates, Timings, and Venue Details of PKL Season 6.

It will be an exciting night for the fans as the match will mark the beginning of the Playoffs match. Both the teams have had different PKL campaigns so far, and hence it makes the contest even more exciting. PKL Season 6 Points Table and Rankings: Puneri Paltan Beat Hyderabad Steelers to Top Points Table.

When to watch U Mumba vs U.P. Yoddha, PKL 2018-19 Playoffs match on TV? Know Date, Timings, and Venue of the Eliminator 1 match of Pro Kabaddi League, Season 6 here:

After the league stages, it will be U Mumba vs U.P. Yoddha in the first Eliminator (1) match of the Pro Kabaddi League (PKL) Season 6, on December 30, i.e. Sunday. The contest will take place at Rajiv Gandhi Indoor Stadium, in Kochi, with the start time scheduled to begin at 8.00 pm (IST).

Star Sports Network is the official broadcaster of the PKL Season 6 in India. The fans can see the live match telecast on Star Sports 1 Hindi and Star Sports 2 channels.

How to watch the online streaming of U Mumba vs U.P. Yoddha, PKL 2018-19 Playoffs, Eliminator 1 match, in India?

The fans will be able to watch the match via online streaming too. The fans will have to tune into Star Sports’ live streaming service, i.e. Hotstar. The fans can also catch the live coverage about the PKL Eliminator 1 match by clicking here.