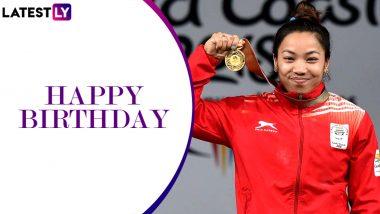 Commonwealth Games and World Championships gold medallist, Saikhom Mirabai Chanu celebrates her 26th birthday on August 08, 2020 (Saturday). Chanu became only the second Indian after Karnam Malleswari and first in 22 years to clinch a gold medal at the World Weightlifting Championships. She lifted a whopping 194 kg to win the gold and make the nation proud. Mirabai Chanu also clinched the top honours at the 2018 Commonwealth Games in Gold Coast adding to her tally of a silver medal from the 2014 edition of the continental event. On her birthday, take a look at some interesting facts about Mirabai Chanu. Mike Tyson Reveals How He Transformed Himself Physically to Train for His Comeback Boxing Fight Against Roy Jones Jr.

Mirabai Chanu broke the Commonwealth Games weightlifting record with a gold medal at the 2018 Gold Coast event. Mirabai Chanu lifted a total of 196 kg (86 kg in Snatch and 110 kg in Clean and Jerk) at the event breaking the previous record set by Augustine Nwaokolo of Nigeria in 2010, who had lifted 175 kg to claim the top honours eight years ago. As Mirabai Chanu turns 26, take a look at some lesser-known facts about one of India’s biggest athletes. Tokyo Bay Olympic Rings Temporarily Removed for Maintenance.

(The above story first appeared on LatestLY on Aug 08, 2020 08:15 AM IST. For more news and updates on politics, world, sports, entertainment and lifestyle, log on to our website latestly.com).