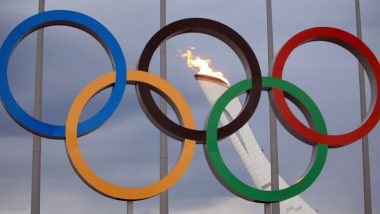 Tokyo, Aug 6:  The Olympic ring monument in the Tokyo Bay area has been temporarily removed as it set to undergo safety inspections and maintenance following the postponement of the showpiece event.

According to Kyodo News, the rings will be placed back in the same position in about four months' times. The monument, which is 33m in width and 15m in height, was towed away by small boats.

Tokyo 2020 was initially set to be hosted in July this year but due to coronavirus pandemic, it will now take place from July 23 till August 8 in 2021.

The Olympic rings monument installed in Tokyo Bay for the 2020 Summer Games was temporarily removed for maintenance https://t.co/OZU5eRR9FD pic.twitter.com/4OJqP1ehV7

Games' spokesman Masa Takaya has not ruled out the possibility of hosting the postponed Olympic Games behind closed doors while insisting that nobody wants to see the games without spectators.

"This autumn onwards, we will have a meeting body attended by these three parties, so we will see the outcome of this meeting body," Takaya told reporters earlier this week.

International Olympic Committee (IOC) President Thomas Bach had said in July that the IOC is opposed to staging events without fans.

"In this respect, we will keep monitoring the situation carefully of COVID-19 then we will have thorough discussions among key parties to deliver a safe and secure games next year," he added.

(The above story first appeared on LatestLY on Aug 06, 2020 02:04 PM IST. For more news and updates on politics, world, sports, entertainment and lifestyle, log on to our website latestly.com).