Chopra was the first one to make his way into the final courtesy of a brilliant first attempt throw of 86.65m. Nadeem too didn't disappoint and registered a throw of 85.16m to secure his place in the finals. On Saturday, these two titans would be up against each other in a bid to claim not just continental, but global supremacy in the event. 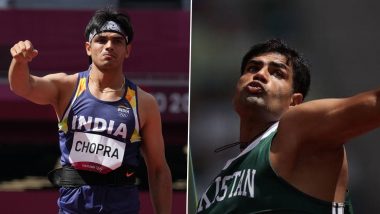 Regardless of the sport, an India-Pakistan rivalry automatically adds that extra amount of flavour to the table. And this historic rivalry would have a new chapter written to its name in the ongoing Tokyo Olympics 2020 where India's Neeraj Chopra and Pakistan's Arshad Nadeem would compete in the javelin throw final event on Saturday, August 7. This isn't just something to look forward but one has to congratulate both Chopra and Nadeem for making sure that the India-Pakistan rivalry has been taken to a stage as big as the Olympics where millions across the world would have their eyes glued to figure out who among the two would claim bragging rights in the javelin throw finals.When is Neeraj Chopra’s Next Match? Get Details of Indian Javelin Thrower's Final Match, Date and Time at Tokyo Olympics 2020

Chopra was the first one to make his way into the final courtesy of a brilliant first attempt throw of 86.65m. He didn't even take a shot in having second and third attempts as he knew he had easily made it to the finals of the event whilst topping his group. Later, Pakistan's Nadeem too didn't disappoint and registered a throw of 85.16m to top his group secure a place in the finals. On Saturday, these two titans would be up against each other in a bid to claim not just continental, but global supremacy in the event.

But it wouldn't be easier for the both of them. Along with them, competing in the finals would also be Johannes Vetter, who recorded 85.16m and finished second behind Chopra in Group A. The German has been widely regarded as the overwhelming favourite to win the gold medal, given his personal best-which is a whopping 97.76m! There are others as well. Germany's Julian Weber and the Czech Republic duo of Jakub Vadlejch and Vitezslav Vesley are favourites as well. It would be a tough challenge for both Chopra and Nadeem but they surely know how to make a mark. Best Of Luck Neeraj Chopra! Fans Wish Indian Athlete Ahead Of Javelin Throw Final At Tokyo Olympics 2020

Chopra had won the gold medal back in the 2018 Asian Games in Jakarta and Nadeem had settled for bronze in the competition. The duo shared a heartwarming moment after the match but they're sure to reignite this rivalry and give it their best to come out on top. No matter what the outcome is eventually, we can simply thank Chopra and Nadeem for helping the India-Pakistan rivalry climb to greater heights make its presence felt in the javelin throw final event at the Tokyo Olympics 2020. Let's hope both give their best and we can get to witness greatness in the making.

(The above story first appeared on LatestLY on Aug 05, 2021 02:45 PM IST. For more news and updates on politics, world, sports, entertainment and lifestyle, log on to our website latestly.com).