When is Neeraj Chopra’s Next Match? Get Details of Indian Javelin Thrower's Final Match, Date and Time at Tokyo Olympics 2020

Neeraj Chopra is on the cusp of making history for India in track and field athletics as he is set to compete in the final of the javelin throw event at the Tokyo Olympics 2020. He has already come up with a record-breaking performance in the qualifying round and now, is set to do the same in the final. 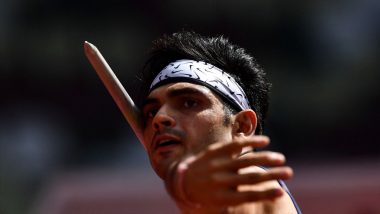 Indian athlete javelin thrower made history on Wednesday by becoming the first-ever Indian to make it to the final of the javelin throw event at the Olympics. He cleared a distance of 86.65m, in just his first attempt and didn't make any thereafter. Not just this, he left many in the sports world in awe as he outperformed gold medal favourite, Johannes Vetter of Germany, and he eventually topped his group and stormed into the finals of the event, to be held on Saturday, August 7.  What a Throw! Neeraj Chopra’s Heroics in Javelin Throw Qualifying Round Leave Virender Sehwag and Netizens in Awe

The 23-year old had been tipped by many to win India her first medal in track and field at the Olympics and he didn't disappoint at all. He started with short steps and then launched his javelin with full strength. From the time it was launched, it was as if he knew that he had crossed the qualification mark. And he did as well. No wonder he didn't even think of attempting a second and third time. All of this, in his very first Olympics. Here are the details of the final match.

.@Neeraj_chopra1 becomes the 1st ever Indian to qualify for the final of Javelin throw event at the #Olympics

Competing in the Olympics final would definitely have its own pressure but Chopra has demonstrated that he is ready to help India make history on Sunday. He has done it before--winning the U20 World and Asian Games championships in 2016. The Olympics is a different ball game but one can bet that the star javelin thrower would be confident and ready, to etch his name in the history books and fetch his country glory in the biggest stage.

(The above story first appeared on LatestLY on Aug 05, 2021 01:23 PM IST. For more news and updates on politics, world, sports, entertainment and lifestyle, log on to our website latestly.com).