Nadal is just one match away from registering his name in the history books as the men's singles player with a record of 21 Grand Slam titles. His unmatched resilience proved to be too much for Berrettini with the Spaniard entering the Australian Open 2022 final. He faces Daniil Medvedev next, a player who has been a consistent performer in recent years. 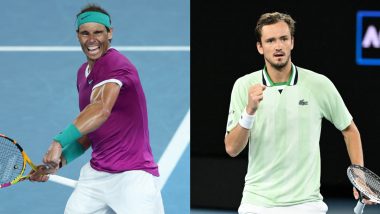 Rafael Nadal finds himself on the cusp of greatness as he entered his sixth Australian Open men's singles final. The Spaniard outplayed Matteo Berrettini 6-3 6-2 3-6 6-3 in what was a thriller of a contest and is just one game away from achieving greatness in men's singles tennis. He has Daniil Medvedev standing in his way though. The relentless Russian ended Stefanos Tsitsipas' title challenge with a 7-6 (5), 4-6, 6-4 win over the Greek to advance to the final on Sunday, January 30, where he would now go one-on-one against Nadal-- a match that has already got many tennis lovers talking. Medvedev would be keen on avenging his loss to Nadal in the 2019 US Open final. Rafael Nadal vs Daniil Medvedev in Australian Open 2022 Men's Singles Final Tennis Match: Know Date and Time to Watch The Ultimate Showdown

Also, in other matches, France's Kristina Mladenovic and Croatia's Ivan Dodig teamed up to beat the Aussie duo of Jaimee Fourlis and Jason Kubler to win the mixed doubles title. They beat Fourlis and Kubler 6-3, 6-4 en route to the title. Let us take a look at the major highlights of Day 12 in Australian Open 2022. Rafael Nadal Reacts After Entering Australian Open 2022 Final, Writes, ‘I Feel Alive in Terms of My Tennis Life’ (Check Post)

#It was also his 29th Grand Slam final overall.

#Nadal's victory over Berrettini was his 500th overall on hard court.

#Nadal and Medvedev had met in the 2019 US Open final where the latter was beaten.

The focus of the Australian Open now shifts to the women's singles final between Ashleigh Barty and Danielle Collins. The Australian, who was one of the contenders for the title, proved herself with dominant performance all throughout the competition and she would love to cap it off with a Grand Slam title, which would be her third overall. But Collins is no easy opponent. This clash would be one to surely watch out for!

(The above story first appeared on LatestLY on Jan 28, 2022 09:18 PM IST. For more news and updates on politics, world, sports, entertainment and lifestyle, log on to our website latestly.com).