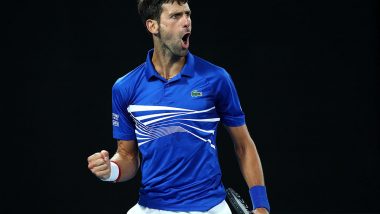 Belgrade, August 13: Tennis star Novak Djokovic confirmed on Thursday that he will take part in the US Open, which is slated to be the first Grand Slam tournament since the resumption of the sport after the coronavirus outbreak.

"I'm happy to confirm that I'll participate at #CincyTennis and #USOpen this year," Djokovic tweeted. "It was not an easy decision to make with all the obstacles and challenges on many sides, but the prospect of competing again makes me really excited," the 17-time Grand Slam winner added.

I’m happy to confirm that I‘ll participate at #CincyTennis and #USOpen this year. It was not an easy decision to make with all the obstacles and challenges on many sides, but the prospect of competing again makes me really excited 😃💪🏼 https://t.co/qgxSTHrKK4 pic.twitter.com/tg6rgwfFqm

The US Open is due to get underway behind closed doors in New York on August 31. Earlier, defending champion Rafael Nadal pulled out of the US Open amid concerns over the Covid-19 pandemic. Novak Djokovic Confirms Participation in US Open 2020 and Cincinnati Masters (See Post).

"After many thoughts, I have decided not to play in this year's US Open," Nadal had said on Twitter.

"The situation is very complicated worldwide, and Covid cases are increasing. It looks like we still don't have control over it. We know that the reduced tennis calendar is barbaric this year after 4 months stopped with no play, I understand and thank for the efforts they are putting in to make it happen," the 19-time Grand Slam champion had said.

Djokovic drew a lot of flak for hosting a charity tennis event in the Balkans in June in which he and a number of players had tested positive for Covid-19.

(The above story first appeared on LatestLY on Aug 13, 2020 08:55 PM IST. For more news and updates on politics, world, sports, entertainment and lifestyle, log on to our website latestly.com).