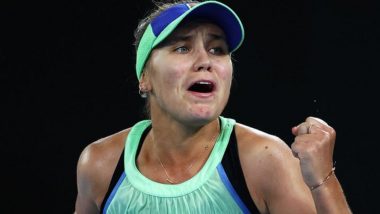 When Sofia Kenin made it to the finals of women’s singles Australian Open 2020, it surprised many. Now, the 21-year-old American has stunned one and all, especially two-time Grand Slam winner, Garbine Muguruza to win the Australian Open 2020 title. This was Kenin’s first Grand Slam final, and she now walks out of it as a proud winner. Kenin defeated Muguruza 4-6, 6-2, 6-2 in a contest that lasted two hours and three minutes. Jimenez Kasintseva, 14 Becomes First Andorran to Win Australian Open Girls' Tournament.

Interestingly, Kenin now becomes the youngest player to lift the trophy in the last 12 years. The youngster aggressively fought back after losing the first set and then subsequently went on to win the next two sets.

Kenin defeated some big names on her journey to the finals. In the semi-finals, the 21-year-old American defeated Ashleigh Barty. In the quarters, she was up against Ons Jabeur.

Kenin after her first Grand Slam win said she can’t describe the feeling. “My dream has officially come true, I can’t even describe this feeling. It’s so emotional and I worked so hard. I’m just so grateful to be standing here. Dreams come true. If you have a dream, go for it and it’s gonna come true,” said Kenin.

The American tennis player made it to the fourth round of the French Open last year. At Wimbledon and US Open she could only manage a second and third-round finish respectively.

(The above story first appeared on LatestLY on Feb 01, 2020 04:55 PM IST. For more news and updates on politics, world, sports, entertainment and lifestyle, log on to our website latestly.com).