Who Is Aditi Ashok? Here Are the Five Facts About the Indian Golfer at the Tokyo Olympics 2020

The 23- year old got off to a good start on Wednesday and on Thursday, she continued with her momentum, carding five-under 66 in the second round of the women's golf event to finish joint second with Nanna Koerstz Madsen (64) and Emily Kristine Pedersen (63). 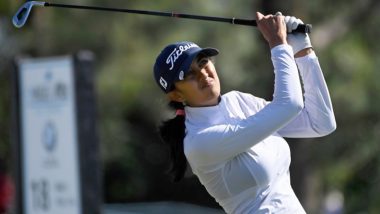 There have been many Indian athletes who have had memorable performances in the ongoing Tokyo Olympics 2020 and to be honest, this has been perhaps India's best performance at the Summer Games in their last few appearances. While names like Mirabai Chanu, PV Sindhu and Lovlina Borgohain are doing the rounds, golfer Aditi Ashok is slowly taking Indian golf to newer heights as she aims to make a podium finish in the competition. The 23- year old got off to a good start on Wednesday and on Thursday, she continued with her momentum, carding five-under 66 in the second round of the women's golf event to finish joint second with Nanna Koerstz Madsen (64) and Emily Kristine Pedersen (63). She is trailing the world number one, USA's Nelly Korda by just four shots. Vinesh Phogat Fails to Make it to Repechage Round at Tokyo Olympics 2020, Will Return Home Empty-Handed

She has kept herself in contention for a medal at Tokyo, which would also be India's first-ever in the sport by hitting birdies on Hole Nos 2,5, 15, 17 and 18. If she can maintain this form, she would no doubt be a contender for a medal at the Tokyo Olympics 2020. Let us look at some facts abut her.

Here are five facts about her:

1) Aditi started playing golf when she was just five years old! Yes, that's right. Her father noticed her love for the sport at this young age and took her to the Karnataka Golf Association, where she had her first formal training,

2) She continues to be the trendsetter in Indian women's golf as she became the first to represent the country at the LPGA Tour in 2017.

3) Aditi Ashok, despite being just 23 years of age, has already been felicitated with the Arjuna award in 2020.

5) This is her second appearance at the Olympics after Rio in 2016, where she led for a short period in the second round but finished 41st out of 60 golfers in the competition.

Even if she doesn't win a medal in Tokyo, her performance has set a standard for Indian golf to follow and hopefully, it would benefit the sport on the national level with many more being inspired to take it up, in the future.

(The above story first appeared on LatestLY on Aug 05, 2021 04:22 PM IST. For more news and updates on politics, world, sports, entertainment and lifestyle, log on to our website latestly.com).