We witnessed action-packed wrestling last week on WWE where NXT and SmackDown performed better than Raw in terms of rating and viewership. Sasha Banks and Bayley now rule the female locker room in WWE as they both have Tag Team as well as the world titles on their shoulders. Last week on NXT, we saw Keith Lee receiving world title match challenge from Karrion Kross. 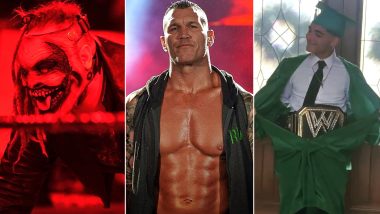 We witnessed action-packed wrestling last week on WWE where NXT and SmackDown performed better than Raw in terms of rating and viewership. Sasha Banks and Bayley now rule the female locker room in WWE as they both have Tag Team as well as the world titles on their shoulders. Last week on NXT, we saw Keith Lee receiving world title match challenge from Karrion Kross. Now let us take a look at top five WWE news which include Bray Wyatts's tweeting interesting quote to Randy Orton's son completing high school graduation. Roman Reigns to Feature as Contestant on Upcoming Episode of 'The R-Truth Game Show', WWE Network Reveals on Twitter.

Bray Wyatt is known to always confuse his fans with his weird tweet which is difficult to decode. 'The Fiend' character finally made the return to SmackDown on the last week's episode of the blue brand, where he attacked Alexa Bliss. Meanwhile, Bray Wyatt has posted an interesting message on his Twitter handle which make us recall the famous quote from George Orwell's novel, 1984 and were also in Rage Against the Machine's song, "Testify." Let us take a look at the tweet.

You’ve been watching the show Dark haven’t you? I don’t blame you because it’s a good show.

2. Alexa Bliss Gets a Unique Proposal

Alexa Bliss received a unique proposal from a fan named Antonio who paid around $400 to the hot WWE Diva, in order to ask her for a date. Alexa Bliss took this sportingly and replied to the fan in a very smart polite way. Let us take a look at the whole scenario in the below video. The fan tried out his luck on Cameo, a website on which the fans and supporters can seek customised video shout-outs from their favourite WWE personalities.

Someone seems to have paid Alexa Bliss $400 on Cameo to ask her out, which she said no to in the kindest way possible. pic.twitter.com/Gz7ySCSBTe

Randy  Orton is known these days for ending taking out many legends like Big Show, Christian and Edge since past few weeks. Also, The Viper has now challenged Drew McIntyre for WWE Championship, the match will take place at SummerSlam pay-per-view. Orton has more reasons to rejoice as his son Michael Kessler has just completed high-school graduation. Let us take a look at the recent post of Randy Orton's.

This video was taken just before my oldest’s, @michaelkessler24 high school graduation ceremony. At the ceremony now. So proud of this kid! Hopefully he doesn’t trip on that gown on his way up on stage, but let’s just say @kim.orton01 and I have a friendly bet that SOMEONE will 😈

WWE recently released its quarterly report, where the company's profit exceeded everyone's expectation. WWE Chairman Vince McMahon who has currently fired Paul Heyman from the post of Raw's Executive Director mentioned about him in the memo. Vince McMahon while addressing his staff regarding the company's performance in the last three months appreciated Heyman for his creative work on Raw. Vince McMahon words in the meeting were,'As far as Paul Heyman's concerned, he did a very good job in terms of creativity.' WWE NXT July 29, 2020 Results and Highlights: Dexter Lumis Earns Second Spot in North American Title Ladder Match at TakeOver XXX; Karrion Kross Eyes on Keith Lee’s World Championship Belt.

Tessa Blanchard is still in Mexico, but she's talking to WWE. We've been told she has "open communication" with Triple H. Nobody is "chewing" Vince's ear off... nobody's speaking up to Vince right now. This is not the current time to do such a thing in #WWE

WWE fans are eagerly waiting for SummerSlam 2020 which is scheduled to take place on August 23, 2020. We have an exciting SmackDown and NXT episode coming up this week, as we are just done with an action-packed episode of Monday Night Raw.

(The above story first appeared on LatestLY on Aug 04, 2020 09:01 AM IST. For more news and updates on politics, world, sports, entertainment and lifestyle, log on to our website latestly.com).