WWE NXT July 29, 2020 episode at Performance Center in Orlando, Florida turned out to be a better show than this week's Monday Night Raw from the perspective of a fan. As we witnessed some amazing wrestling action from the wrestlers of the black and gold brand of WWE. 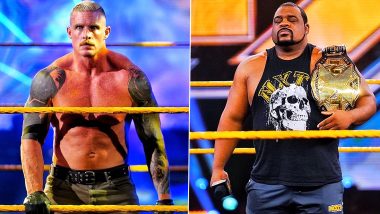 WWE NXT July 29, 2020 episode at Performance Center in Orlando, Florida turned out to be a better show than this week's Monday Night Raw from the perspective of a fan. As we witnessed some amazing wrestling action from the wrestlers of the black and gold brand of WWE. Dexter Lumis earns the second spot for NXT North American title at TakeOver XXX. Karrion Kross has set his eyes on Keith Lee's NXT World Championship belt. Meanwhile, you have arrived at the right page if you are looking for NXT July 29, 2020 results and highlights. WWE NXT July 22, 2020 Results and Highlights: Keith Lee Relinquishes North American Title; Karrion Kross Defeats Dominik Dijakovic to Continue His Winning Streak (View Pics)

Last week we saw Bronson Reed become the first person to earn NXT North American title opportunity after defeating Johnny Gargano and Roderick Strong. This week Dexter Lumis defeated Finn Balor and Timothy Thatcher to earn the second spot in that match which will take place at TakeOver XXX. Karrion Kross took out Dominik Kijakovic in front of Keith Lee's eye in the last week episode of NXT. The Limitless One called out Kross this week, however, we saw Cameron Grimes answer his call. The NXT World Champion beat down Grimes. After that, we received a message from Kross where he issued a stern ultimatum to Lee demanding the NXT Title opportunity he's seeking.

Apart from these main segment, we saw NXT Women's Champion Lo Shirai teamed up with Tegan Nox to defeat Candice LeRai and Dakota Kai. We also saw Johnny Gargano defeat Roderick Strong in one on one match. Shotzi Blackheart failed to emerge victorious against Mercedes Martinez, where we saw some distraction from Robert Stone. The NXT Tag Team Champions Imperium after earning a victory against Ever-Rise were assaulted by Kyle O'Reilly and Bobby Fish, The Undisputed Era. WWE News: From AJ Styles Challenging Undertaker to ‘Loser Leaves Town’ Match at SummerSlam to Raw Recording Lowest 'Third Hour' Viewership in History, Here Are 5 Interesting Updates to Watch Out For.

@realkeithlee has heard the ultimatum from @wwekarrionkross...what choice will he make? Also, will @camerongrimeswwe suffer anymore payback for his actions tonight? #WWENXT

Mercedes Martinez in Team of Aliyah and Robert Stone

The @wwenxt continues now on the @usa_network as @shotziblackheart takes on @realmmartinez! Will this be a good night for the #RobertStoneBrand?

What a way to start @wwenxt as the #WWENXT Women’s Champion @shirai_io & @tegannoxwwe_ are victorious! Don’t miss a moment of action on the @usa_network!

(The above story first appeared on LatestLY on Jul 30, 2020 10:48 AM IST. For more news and updates on politics, world, sports, entertainment and lifestyle, log on to our website latestly.com).