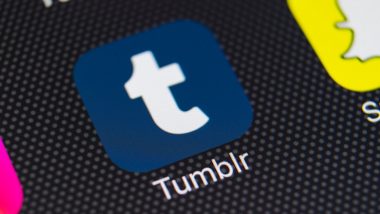 As soon as the ban announcement from Tumblr was official, Apple relisted the app on its iOS store. The company will initiate enforcing new policy from December 17. Though child pornography has been long banned on Tumblr, app's filters failed to screen out some of the adult contents. Facebook Follows Tumblr, Updates its Sex Policy.

Though adult content or abusive content was removed as soon as it was discovered in the audit, Apple altogether decided to take down the app from its App Store. And now, when the company has completely removed all objectionable content, the app has been relisted again.

Tumblr on iOS App Store was initially spotted by TechCrunch and the version 12.2 notes that the update comes with some changes to Tumblr's community guidelines that prohibits certain type of content from being displayed on the platform.

However, Tumblr is yet to make a respond on these misfires. The updated guidelines on Tumblr urges the users not to upload any adult content including images, videos, GIFs or illustrations that depicts sex acts.

(The above story first appeared on LatestLY on Dec 14, 2018 04:28 PM IST. For more news and updates on politics, world, sports, entertainment and lifestyle, log on to our website latestly.com).