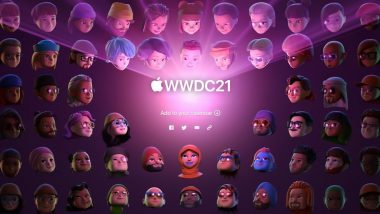 Apple, the Cupertino based global tech giant will host its WWDC (Worldwide Developer Conference) 2021 event from today globally. During the event, the company is expected to launch its new softwares such as new versions of iOS, iPadOS, macOS, tvOS and WatchOS. Apple could also launch its next-gen MacBook Pro models. The five-day event will consist of 200 in-depth sessions for developers which will enable them to learn and create apps for the Apple ecosystem. The launch event will commence at 10 am PDT (10:30 pm IST) via Apple's official YouTube channel. Apple is expected to launch iOS 15, iPadOS 15, macOS 12, watchOS 8, tvOS 15 and new MacBook Pro models today. These softwares are likely to come with several improvements as compared to their current versions. Apple WWDC 2021 To Begin on June 7, 2021; Here’s What To Expect.

As per a report, iOS 15 is expected to come with better notification controls and might include a new iMessage service with social network-like features to take on Facebook's WhatsApp. The company could also bring several new privacy features on the iOS 15. Other features might include a new lock screen and an always-on display.

Major developments ahead. Join our worldwide developer community for #WWDC21 on June 7 at 10 a.m. PDT.

Tap the ♥️ and we’ll send you a reminder on event day. pic.twitter.com/CN6KbQGe0E

Apple is not likely to bring some major changes to macOS this year, however, a report suggests that the company could announce the new macOS 12 during the WWDC event with new improvements and enhancements. MacBook, iMac and Mac users are expected to get the macOS 12 this year.

iPadOS 15 is said to come with similar home screen customisation as seen on iPhones, improved widgets and more. Moreover, Apple could also announce several accessibility features that will be available via iOS 15 and iPadOS 15 updates.

For Apple Watch users, the wacthOS 8 software is also likely to be announced with changes related to fitness tracking. WatchOS 8 is rumoured to come with a new feature called Assistive touch that will allow users to control their Apple Watch just by moving their wrist or fingers. Apple watchOS 8 could also introduce new watch faces.

In addition to this, the company could also launch new MacBook Pro models and tvOS 15 for Apple TV users.

(The above story first appeared on LatestLY on Jun 07, 2021 09:19 AM IST. For more news and updates on politics, world, sports, entertainment and lifestyle, log on to our website latestly.com).