Mitron, The Indian Alternative to TikTok? Know Everything About The Short Video Making Social Media App With Over 5 Mn Downloads 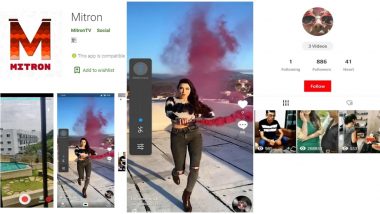 There are many short-video making applications available on the Play Store, but TikTok has huge popularity compared to others. But there is a new entrant in this space called 'Mitron', and it is completely made in India. Reportedly, launched by a student from IIT Roorkee about a month ago, the application has crossed over 5 million downloads already! With the growing wave of hatred against TikTok and calls to ban this app, will Mitron take over as the new rage? Let us tell you everything about this new Indian short video making social media application. #UninstallTikTok Funny Memes & Jokes Take over Twitter as Netizens Have Not Yet Made Peace With YouTube vs TikTok Feud!

As per the description on the Play Store, "Mitron is a free Short Video and Social Platform. It is designed for people to showcase their innovative videos inline with our theme of light humour." The app's seamless interface allows user to create, edit and share their videos. They can also browse through a library of top videos across the globe. Looking through the images of the app on the Play Store, the interface looks very similar to that of TikTok. A user's profile page, the making of videos looks almost the same.

How Does it Work?

If a user has to make videos,  then they will have to make a profile on the app registering with a username and a password. Otherwise, one can just scroll on the homepage for watching through other videos that are uploaded. For recording a video, there's a red record sign button on the screen. A user can record their content and publish it for others to see. While you are watching the video, there is an option to like, comment and share it.

If you have been familiar with using TikTok, the application Mitron is just the same. As per some tweets, it is launched by an IIT Roorkee student and is now among the Top Charts on Google Android Play Store. TikTok Ratings Drop Further on Google Play Store, Netizens Can’t Keep Calm As They Trend #BanTikTokIndia With Funny Memes and Jokes.

IIT Roorkee student has quietly released a Tiktok clone called “Mitron TV” a month back and it has not only achieved 5mn installs, it is now no.2 android app in India thus raking in half a million installs per day. Name of the app is the growth hack here IMO pic.twitter.com/z24YtNOwJr

IIT Roorkee student has quietly released a Tiktok clone called “Mitron TV” a month back and it has not only achieved 5mn installs, it is now no.2 android app in India thus raking in half a million installs per day. Name of the app is the growth hack here IMO pic.twitter.com/baB3xyL675

In the last few weeks, we have seen repeated hate against TikTok following some questionable content. The ratings of the app have also been hampered in a few days, as a lot of people have reported it following the whole YouTube vs TikTok controversy. Now it remains to be seen if Mitron is likely to start a new rage as TikTok did in its start.

(The above story first appeared on LatestLY on May 26, 2020 09:06 AM IST. For more news and updates on politics, world, sports, entertainment and lifestyle, log on to our website latestly.com).