#UninstallTikTok Funny Memes & Jokes Take over Twitter as Netizens Have Not Yet Made Peace With YouTube vs TikTok Feud! 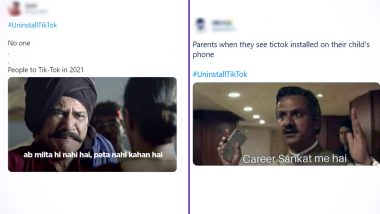 It seems like netizens are not going to forget the YouTube vs TikTok feud, or let just say the online debate gave users a chance to delete the Chinese app from phones. Carry Minati’s roast video which gave rise to a heating feud between TikTokers vs YouTubers, who provides better content, continue till date. It has been nearly three weeks now, but netizens have not made their peace with the online debate, yet. After TikTok vs YouTube, #BanTikTokIndia surfaced, and now, it is #UninstallTikTok. Yes, after objectionable TikTok videos circulated online, and the app’s ratings at Google Play Store lowered, Twitter now trends #UninstallTikTok. Displaying their dislike towards the short-video sharing platform, people are making funny memes and jokes, urging everyone to uninstall the app completely, if at all they have. From CarryMinati to Faizal Siddiqui, Why YouTube and TikTok Content Creators Should Stop Indulging in Tomfoolery and Realise Their Current Responsibility- Spreading Awareness About COVID-19, UNANIMOUSLY!

It was started by TikToker Amir Siddiqui, self-proclaimed social media influencer who in his now-deleted IGTV video said that the video-sharing app provides better content than YouTube. Then came, roast king, Ajey Nagar, aka Carry Minati, who roasted Siddiqui in response. Carry’s video was later taken down, adhering to YouTube’s harassment policy. This was not taken well by Carry’s followers, who, ever since then have rallied in support of the YouTuber, trolling TikTokers with memes and jokes. After giving poor ratings about the app on Google Play Store, which led the rating drop from 4.9 to 1.2 stars in just a few days, netizens are now trending #UninstallTikTok. Hilarious memes and jokes have taken over Twitter, as internet users continue with their YouTube vs TikTok feud. Is TikTok Ban the Solution? From CarryMinati's 'Flawed' YouTube vs TikTok 'Roast' Video To The App's Google Play Store Rating Plummeting to 2.0, Here's How We Are Missing The Point.

Parents when they see tictok installed on their child's phone #UninstallTikTok pic.twitter.com/9GAJ0ozjoK

People to Tik-Tok in 2021 pic.twitter.com/eXRl1I2dIH

Again We Have Those Who Never Installed TikTok!

When #UninstallTikTok is trending but you never installed it pic.twitter.com/9JpejVEqBU

while #UninstallTikTok is Trending On twitter but you never installed it. coooooool 😎😂 pic.twitter.com/WOQr7WyS2l

When #UninstallTikTok is trending but you never Installed it

We don’t know when, but the battle should end. But doesn’t seem to be anytime soon. Last night, Carry announced another video to be coming on his channel soon, which means—more and more memes! Let us just wait and see how far this YouTube vs TikTok battle can go!

(The above story first appeared on LatestLY on May 25, 2020 05:09 PM IST. For more news and updates on politics, world, sports, entertainment and lifestyle, log on to our website latestly.com).