Nothing ear (1) To Be Sold Online Exclusively via Flipkart; India Launch Soon

Carl Pei's Nothing will officially launch its ear (1) earbuds in India soon. Flipkart has released a dedicated microsite for Nothing's upcoming earbuds which hints towards its imminent launch. 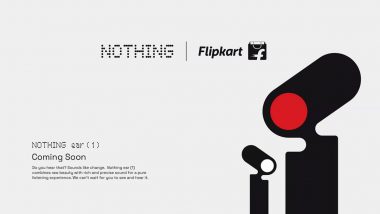 Carl Pei's Nothing will officially launch its ear (1) earbuds in India soon. As a reminder, Car Pei left OnePlus last year to start his audio brand called 'Nothing'. It was last month when the company announced that it will launch Nothing ear (1) soon. In a new development, the brand now announced a strategic alliance with Flipkart marketplace to retail its first product online in India. Carl Pei’s Nothing Drops Images of Its First Product, Could Be Wireless Earbuds.

Flipkart has released a dedicated microsite for Nothing's upcoming earbuds which hints towards its imminent launch. The Flipkart microsite does not reveal many details about the earbuds. As per a report, Nothing ear (1) is expected to feature a transparent design with a unique form. Also, in March 2021, the company rolled out the Concept 1 design providing us how earbuds will look like.

Concept 1 had revealed a transparent body with an in-ear styled canal bud and a black pipe-shaped battery. Apart from this, nothing much is known about Nothing ear (1). The company has reportedly confirmed that ear(1) launch will take place along with the global launch.

(The above story first appeared on LatestLY on Jun 25, 2021 03:21 PM IST. For more news and updates on politics, world, sports, entertainment and lifestyle, log on to our website latestly.com).