OnePlus 9R and OnePlus 9 smartphones will go on sale for Amazon prime users. Interested buyers can get their hands on the handset at 12 pm IST via Amazon.in and official website. 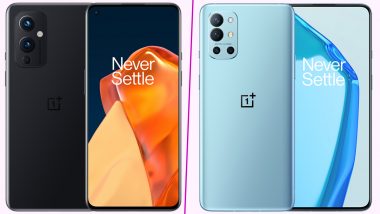 The much talked OnePlus 9R and OnePlus 9 smartphones will go on sale for Amazon prime users. Interested buyers can get their hands on the handset at 12 pm IST via Amazon.in. Moreover, the phones will also go on sale via the official website for Red cable club members at noon. Both the phones are pretty much similar in terms of specifications apart from the camera modules and chipset.  OnePlus 9 Pro Overheating Issue Fixed With OTA System Update.

As a part of the launch offer, the OnePlus 9R and OnePlus 9 phones will get an instant discount of Rs 2,000 via SBI Credit cards and EMI transactions. There's also a cashback of 10 percent on American Express cards. The company is also providing up to 6 months of no-cost EMI on SBI credit cards from April 14 to April 30, 2021.

It's almost time for #YourBestShot.

Read more about the sale and get to flaunt the #OnePlus9Series5G before the rest: https://t.co/5esLC3qKef pic.twitter.com/kGP9n9OIeN

The OnePlus 9 packs a 48MP triple camera module at the back which is assisted by an 8MP ultra-wide-angle lens and 2MP monochrome lens. Unlike its bigger sibling, the OnePlus 9R gets a 48MP quad rear cameras accompanied by an 8MP ultra-wide-angle lens, a 2MP monochrome and a 5MP macro lens. The front camera is a 16MP snapper on both phones. The handsets are fuelled by a 4,500 mAh battery.

(The above story first appeared on LatestLY on Apr 13, 2021 11:43 PM IST. For more news and updates on politics, world, sports, entertainment and lifestyle, log on to our website latestly.com).