OnePlus Ace Reportedly Facing Heating Issues, Here’s What the Company Has To Say

OnePlus Ace smartphone is reportedly facing overheating issues. A OnePlus Ace user has complained about this issue on the Chinese micro-blogging website Weibo. 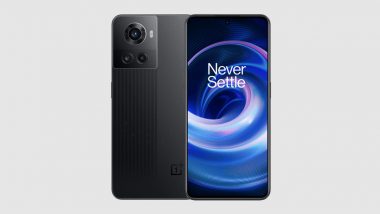 OnePlus Ace smartphone is reportedly facing overheating issues. A OnePlus Ace user has complained about this issue on the Chinese micro-blogging website Weibo. According to the user, the device became very hot after an hour of gaming. Several users also complained about this problem on Weibo. Moreover, some users reported that the smartphone's battery reached a temperature of 43.7 degrees Celsius, whereas the CPU was at 46.5 degrees Celsius when Genshin Impact was played for an hour. OnePlus Ace With MediaTek Dimensity 8100-Max SoC Launched in China.

The Weibo platform was filled with OnePlus Ace overheating complaints with the hashtag 'OnePlus Phones So Hot That It Burns Hands'. As such, the Chinese phone maker had to issue a statement. OnePlus stated that the high temperature of the phone is high due to prolonged gaming, and it is normal. The company also further clarified that the temperature of the smartphone is within the normal range, and the normal usage of the device will not be affected.

(The above story first appeared on LatestLY on May 05, 2022 02:49 PM IST. For more news and updates on politics, world, sports, entertainment and lifestyle, log on to our website latestly.com).