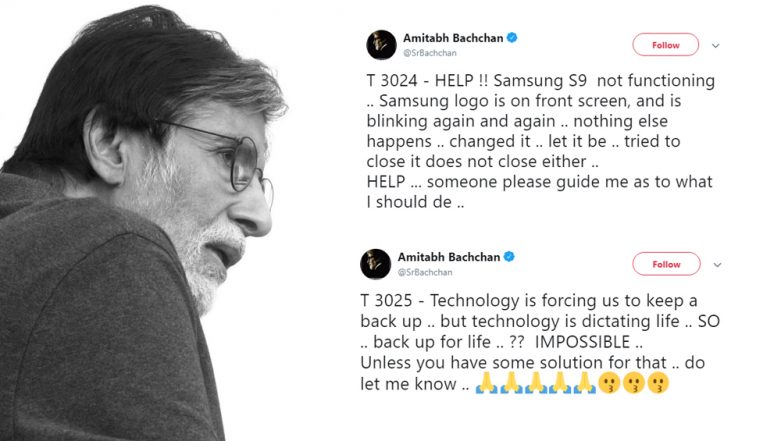 Amitabh Bachchan, an iconic Bollywood sensation, popularly known as Shahenshah of Bollywood is well known for its social media connect. Being a social media buff, he has always been there to express himself on Twitter. Be it personal and society related issues, the Big B is always known to speak out his mind on the micro-blogging site. In the early hours of December 13, the actor faced some issues with his Samsung Galaxy S9 smartphone, which compelled him to seek help from the fans. Samsung Galaxy A8s With Snapdragon 710 SoC is World’s First In-display Camera Smartphone.

Seeking an immediate help from his million fans, he tweeted his concern on Twitter, which says "T 3024 - HELP !! Samsung S9 not functioning .. Samsung logo is on front screen, and is blinking again and again .. nothing else happens .. changed it .. let it be .. tried to close it does not close either ..HELP ... someone please guide me as to what I should de ..,"

HELP ... someone please guide me as to what I should de ..

The Samsung Galaxy S9 smartphone is definitely one of the best camera smartphones out there in the market. But, Samsung's skin on Android OS is not the best among the smartphone makers. Well, this is what we believe is the issue with Amitabh Bachchan's Galaxy S9.

Considering Amitabh Bachchan's tweet, we believe that the Galaxy S9 smartphone seems to have gone in the boot loop. Though the Korean smartphone maker intends to offer personalised features to the users, but too much of tweaking results in loading processor with heavy software burden, which makes the device on the slower side. The phone becomes laggy and RAM management issues and much more. Samsung Will Launch Its First 5G Smartphone By Next Year Jointly With Verizon - Report.

Moreover, Samsung immediately reached out to the actor to resolve the issue with Galaxy S9 with less inconvenience. If the smartphone maker had shown any delay in resolving the issue, the rivals would have chipped-in offering him to switch, which would have been a major loss to the phone maker. As a reminder, Amitabh Bachchan is the brand ambassador of OnePlus and we have seen him endorsing brand’s phone in commercials.