Customers in China have placed more than 2 million pre-orders for Apple's iPhone 13 lineup, surpassing the number of iPhone 12 pre-orders in 2020, the media reported 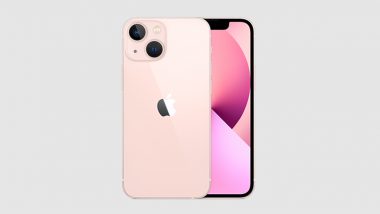 Beijing: Customers in China have placed more than 2 million pre-orders for Apple's iPhone 13 lineup, surpassing the number of iPhone 12 pre-orders in 2020, the media reported. According to AppleInsider, it is likely because of the void left by high-end Huawei handsets. Apple iPhone 13 Series Pre-Order To Begin Today in India, Check Exciting Offers Here.

Chinese customers have already placed more than 2 million pre-orders on retailer JD.com alone as of Thursday, citing the South China Morning Post, the report said. That eclipses the 1.5 million iPhone 12 initial pre-orders placed after those models launched, it added. Huawei's latest P50 and P50 Pro, for example, lack 5G connectivity due to the sanctions, the report said.

The higher demand for Apple's iPhone 13 models appears to stem from Huawei's decline in the country. Because of the US trade sanctions, Huawei is struggling to provide compelling high-end smartphones.

Overall smartphone shipments are on the decline in China since Huawei left a void that has yet to be filled by the country's other Android makers. Apple, however, is thriving. In the second quarter of 2021, Apple ranked as the fourth biggest smartphone vendor in China behind OPPO, Vivo and Xiaomi, the report mentioned.

(The above story first appeared on LatestLY on Sep 17, 2021 10:55 AM IST. For more news and updates on politics, world, sports, entertainment and lifestyle, log on to our website latestly.com).