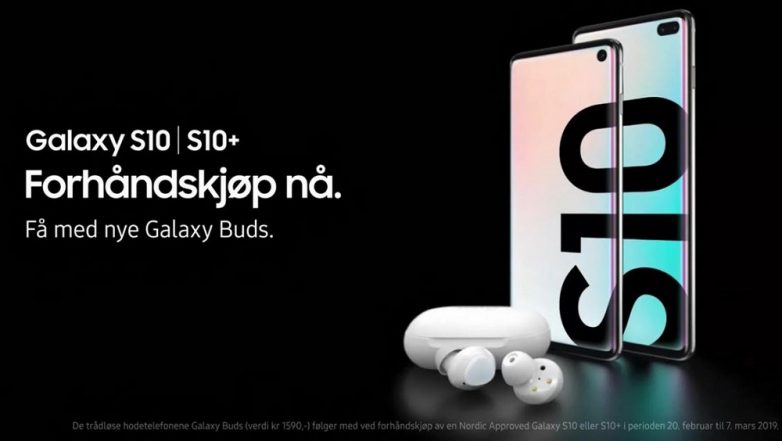 We are about to witness something exciting as Samsung Mobile will launch its 10th anniversary Galaxy S Series smartphones today. The Korean tech giant will be revealing the devices today at the Unpacked event in San Francisco which is about to commence in less than an hour. The long wait for the new Galaxy S10 smartphones will finally come to an end when the event kick-offs at 11 AM PT (12.30 AM IST). The company will also be unveiling its first ever foldable device - Galaxy Fold at the event. Samsung Galaxy S10 Launch Event Live News Updates: Price, Specifications, Features, Pre-orders & Colours.

We can also expect new Samsung wearables to be unveiled at the launch event today. We have already seen details of Watch Active, Galaxy Buds & Fit e leaked online ahead of the launch. New Samsung Galaxy S10 Flagship Smartphone To Be Released on March 8; Pre-orders Open in US Ahead of Global Launch

The launch event of Samsung Galaxy S10 will commence at 11 AM PST (around 12.30 AM IST) onwards. The company will be broadcasting the live telecast and online stream of the ‘Unpacked’ event on its official website and social media handles. You can watch the telecast of Galaxy S10 here. Samsung Galaxy Watch Active, Galaxy Buds & Fit e Leaked Ahead of Galaxy S10 Launch Event.

The future of mobile will unfold on February 20, 2019 #Unpacked pic.twitter.com/lJx2krYjXk

We already know that Samsung will be introducing the new flagship device in three variants - S10e, S10 and S10+. The S10e will be the base variant with up to 6GB of RAM whereas the mid variant S10 will feature up to 8GB of RAM. The top end model S10+ is rumoured to sport up to 12GB of RAM. Samsung Galaxy S10 Plus Hands On Video Leaked Ahead of Global Launch

The base variant, S10e will sport 5.8-inch display screen whereas S10 version could get slightly bigger 6.1-inch screen. On the other hand, the bigger S10+ model will get 6.4-inch AMOLED display screen. Under the hood, the new Samsung Galaxy will be powered by a new 7nm Exynos 9820 chipset for the Indian and other emerging markets. However, the US-spec version of the smartphone will get a Snapdragon 855 SoC.

For photography, the company will be introducing triple rear camera at the back. The models will also vary in terms of battery capacity, the mid variant and top end variants will be backed with 3100 mAh and 4100 mAh respectively.