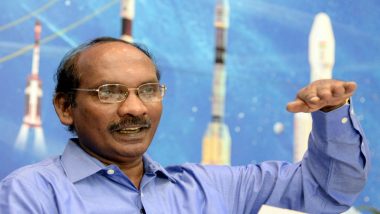 New Delhi, January 1: K Sivan, Indian Space Research Organisation (ISRO) Chief on Wednesday confirmed that the Government has approved Chandrayaan-3 and the project for India's first lunar exploration mission is ongoing. During his address, Sivan also informed that the land acquisition for a second space port has been initiated and the port will be in Thoothukudi in Tamil Nadu. Sharing an update about  Chandrayaan-2, Sivan said its orbiter will function for the next 7 years to produce science data. "We have made good progress on Chandrayan-2, even though we could not land successfully, the orbiter is still functioning, its going to function for the next 7 years to produce science data", he said.

On Tuesday, Union Minister Jitendra Singh informed that India will launch Chandrayaan-3 in 2020. The Minister said that the mission cost will be less than Chandrayaan-2. India may attempt another soft landing on the Moon by next year-end, probably in November, sources in ISRO said on Thursday.  Chandrayaan 2 Project Director Not Included in Third Moon Mission Team of ISRO.

ISRO chief K Sivan: We have made good progress on Chandrayan-2, even though we could not land successfully, the orbiter is still functioning, its going to function for the next 7 years to produce science data pic.twitter.com/6tw683HTnk

Singh said the lander and rover mission will mostly likely happen in 2020. Lauding the Chandrayaan-2 mission, he said it cannot be called a failure as we have learnt a lot from it. "There is no country in the world that has landed on its first attempt. The US took several attempts. But we will not need so many attempts,” Singh said.

Chandrayaan-2 mission was India's first attempt to land on lunar surface. The ambitious mission was launched on July 22, 2018 from Sriharikota in Andhra Pradesh, on board a GSLV Mark III rocket, which is ISRO's largest and most powerful. The mission, which cost around Rs 1,000-crore, was originally scheduled to launch on July 15 but was aborted after a technical glitch.

(The above story first appeared on LatestLY on Jan 01, 2020 12:19 PM IST. For more news and updates on politics, world, sports, entertainment and lifestyle, log on to our website latestly.com).