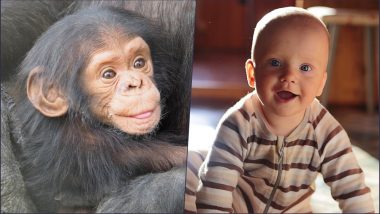 Babies laugh as they both exhale and inhale, in a manner that is remarkably similar to non-human primates, says a new study that can offer insight into vocal production of children with developmental disorders. The findings showed that the youngest babies commonly laughed on both inhalation and exhalation, as do non-human primates like chimpanzees. In the older babies, however, laughter was primarily produced only while exhaling, as is the case in older children and adults. Chimps Sleep on Cleaner Beds Than Humans, Says Study.

"Adult humans sometimes laugh on the inhale but the proportion is markedly different from that of infants' and chimps' laughs. Our results so far suggest that this is a gradual, rather than a sudden, shift," said Disa Sauter, a psychologist and Associate Professor at the University of Amsterdam in the Netherlands.

Sauter said there is no accepted reason why humans, alone among primates, laugh only on exhalation. One possibility, she said, is that it is a result of the vocal control humans develop as they learn to speak. In infants and younger babies, as in non-human primates, laughter occurs as the result of physical play like tickling.

In older individuals, laughter can arise from physical play but also from social interactions, the researchers noted. "Beyond that, I'd be interested in seeing whether our findings apply to other vocalisations than laughter," said Sauter. Ultimately, the research could offer insight into vocal production of children with developmental disorders.

"If we know what normally developing babies sound like, it could be interesting to study infants at risk to see whether there are very early signs of atypical development in their nonverbal vocalisations of emotion."

For the study, the team analysed laughter clips taken from 44 infants and children between 3 and 18 months of age. The recordings were taken from online videos in which babies were engaged in playful interactions. The recordings were then analysed by 102 psychology students, who evaluated the extent to which the laughs in each clip were produced on the exhale versus the inhale. The research will be presented at the Acoustical Society of America's 176th Meeting, in Victoria, Canada.

(The above story first appeared on LatestLY on Nov 10, 2018 09:15 AM IST. For more news and updates on politics, world, sports, entertainment and lifestyle, log on to our website latestly.com).